The ups and downs of Comacchio in the Po delta

There is a special feel to Comacchio in the Po delta – a small Venice of bridges, canals and an oscillating history surrounded by a vast wetland.

The drive from Ravenna in Emilia-Romagna to Venice and Veneto must be one of the most inconspicuous routes in Italy. Looking around it seems the whole country has gone square with flat fields, straight roads and tall, slim trees. Everywhere you look there’s a patchwork of green and blue interrupted at regular intervals by a small bump whenever you cross one of the bridges leading over yet another river or canal in the Po delta.

The attractions of 13 islets in a river delta

In this marshy wetland one town stands out. Comacchio situated on 13 islets in a lagoon north of the present mouth of the river Reno has that Venice feel that attracts tourists.

First Etruscans and then Romans reclaimed part of the land and used it for their summer houses in the country. Goths and Lombards stopped by Comacchio for a taste of the salt pans, until mosquitoes gained dominion through the spread of malaria.

Today the main attraction is eels served in various preparations at every canal side restaurant or cafe, but that era too will presumably come to an end with the classification of the European eel as a critically endangered species. Seems that Comacchio is forever riding on some wave or other. 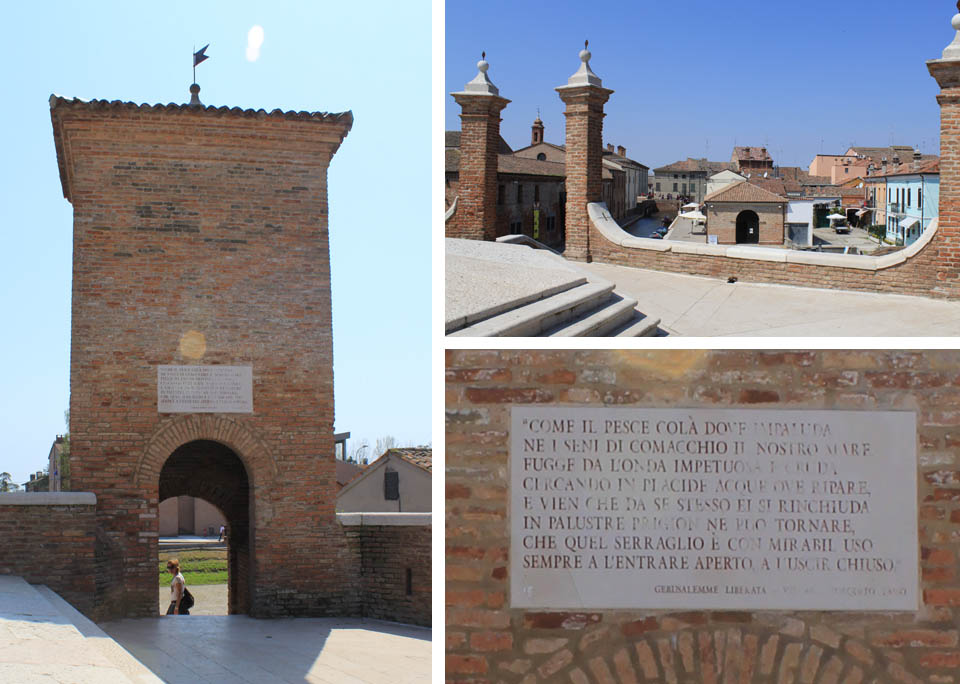 Trepponti bridge in Comacchio in the po delta

With these ups and downs the only thing of some permanence seems to be the Trepponti bridge. A fortified structure with two watchtowers built in 1634 to prevent flooding from water or pirates. The bridge spans four canals and has five broad flights of stairs, which means that you can get in all directions fast. From the vantage point on top of the bridge you have got a good view of the old fish market and the Roman Ship Museum displaying cargo and tools used on a seagoing vessel towards the end of the 1st century BC. From the bridge you would also be able to see out over the flat landscape and the lagoon, if it had not been for a new road blocking the view in that direction.

So instead of admiring the view, I had time to read the quote from the star poet Torquato Tasso‘s Gerusalemme liberata that is carved into the stone:

As in our seas in the Commachian Bay,
A silly fish, with streams enclosed, striveth,
To shun the fury and avoid the sway
Wherewith the current in that whirlpool driveth,
Yet seeketh all in vain, but finds no way
Out of that watery prison, where she diveth:
For with such force there be the tides in brought,
There entereth all that will, thence issueth naught: 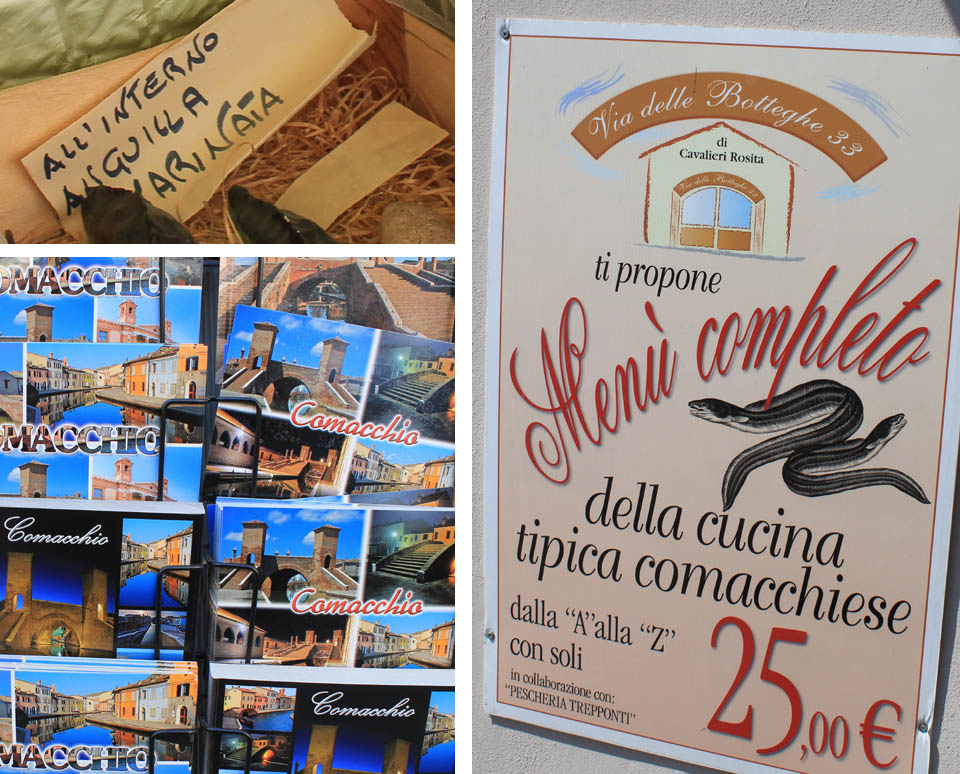 Not a very appealing picture the epic 400 page long poem paints of Comacchio, if you are an eel.

Yet I would definitely recommend a visit. If possible during the Sagra dell’ Anguilla eel festival in October. Then you can also see the historic Manifattura dei Marinati with 12 open fires, where eels are roasted, before being pickled in a special marinate. Or you can visit the eel museum, though I must admit I missed that part of the fun.

With the sun shining down from a clear blue sky on dozens of quaint little bridges waiting to be crossed, I find it very hard to venture inside. Besides it is nice to save something for a rainy day.

If you are visiting Comacchio in the Po delta don’t miss:

The diamond of Ferrara Italy