Cicadas compensate for near invisibility by making an enervating noise. Cicadas noise equals the sound effect of an aircraft or a rock concert.

You know summer has come to southern Italy, when you can’t hear your own thoughts for the enervating noise of cicadas.

As I understand it, the small insects have a built-in drum in their abdomen that can produce noise of up to 120 dB at close range. That equals the sound effect of an aircraft or a rock concert. Enough, to disable phone calls and conversation and to drive anyone, who has to live with the sound from dawn to dusk a little crazy.

Cicadas are temperature sensitive animals, so they don’t make a racket until the thermometer has climbed up over 30C. Then they start clicking very loud and very early in the morning and continue till midnight. Fortunately, they have the consideration to turn down the volume around noon, when everyone surrenders to the heat.

To a Scandinavian the idea of singing cicadas seems attractively romantic, but in reality it can be a regular pain in the neck.Some days the situation is so desperate, it almost makes you wish for rain.

A One Tree Cosmos

I suppose, you could forgive the cicadas if the din served a purpose, but from what I have read, these insects live their entire lives within a very small radius. In fact, they prefer to stay put around a specific tree. Female cicadas lay their eggs in the bark, the eggs develop into nymphs that slide down the trunk to draw juice from tree roots. In due course, when the nymphs have grown up, they climb back up the tree, leave their skin and start searching for a mate.

The clicking noise serves as a male point of attraction, but as the love of their life is always just around the nearest branch, they might be a bit more discreet.

A live cicada seeking refuge on a towel.

Heard but not seen

Now their discretion is entirely visual. In spite of the noise, it is difficult to catch sight of the cicadas, unless you are satisfied with the dry discarded skin they leave behind on tree trunks and steel wires. I don’t think I have seen live cicadas more than twice, one of which demonstrated an alternative mode of singing every time a wanton 11-year-old poked it with his shoe. The cries of the poor insect were heartbreaking, but also highly entertaining, if you asked the kids.

They are not familiar with Greek myth saying that the cicada is the lover of the Titan dawn goddess Eos. She fell in love with a beautiful prince and Zeus helped her to make the prince immortal. Yet they forgot to grant him eternal youth, so the prince ended up as a shrivelled old corpse. He maintained his powerful voice, however, and he is still using it. 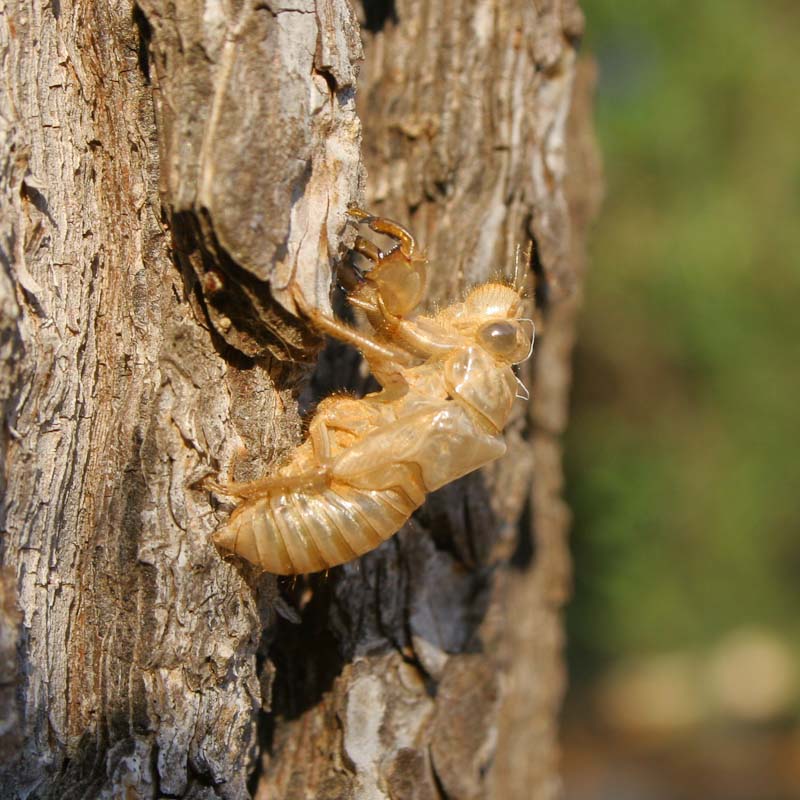 The shrivelled corpse of an immortal prince.

Notes similar to this on Cicadas noise