Grotta del Romito near Papasidero in Calabria is famous for its carvings and the discovery of two prehistoric couples known as Matrimonio-Sati.

Our original plan was to go river rafting, but signposts kept us going in circles through some pretty dramatic mountains, and aimless driving gets kind of boring in the long run, so instead we decided to take a look at some graffiti art from the Stone Ages.

Papasidero near Castrovillari in the Pollino National Park  is very proud of their Grotta del Romito. According to brochures the cave is famous throughout Italy due to the archaeological discovery of bone fragments from two prehistoric couples known as Matrimonio-Sati. The four skeletons of two men and two women were buried in couples 11 000 years ago, and that kind of romance is unique in a European perspective.

In addition to the graves, Grotta del Romito contains a few stalactites and stalagmites of interesting shapes and “several drawings” from Palaeolithic time. I immediately imagined a vast art gallery of cave paintings in Lascaux style, and as the cave is only a “short drive” from Papasidero, it seemed a reasonable outing. 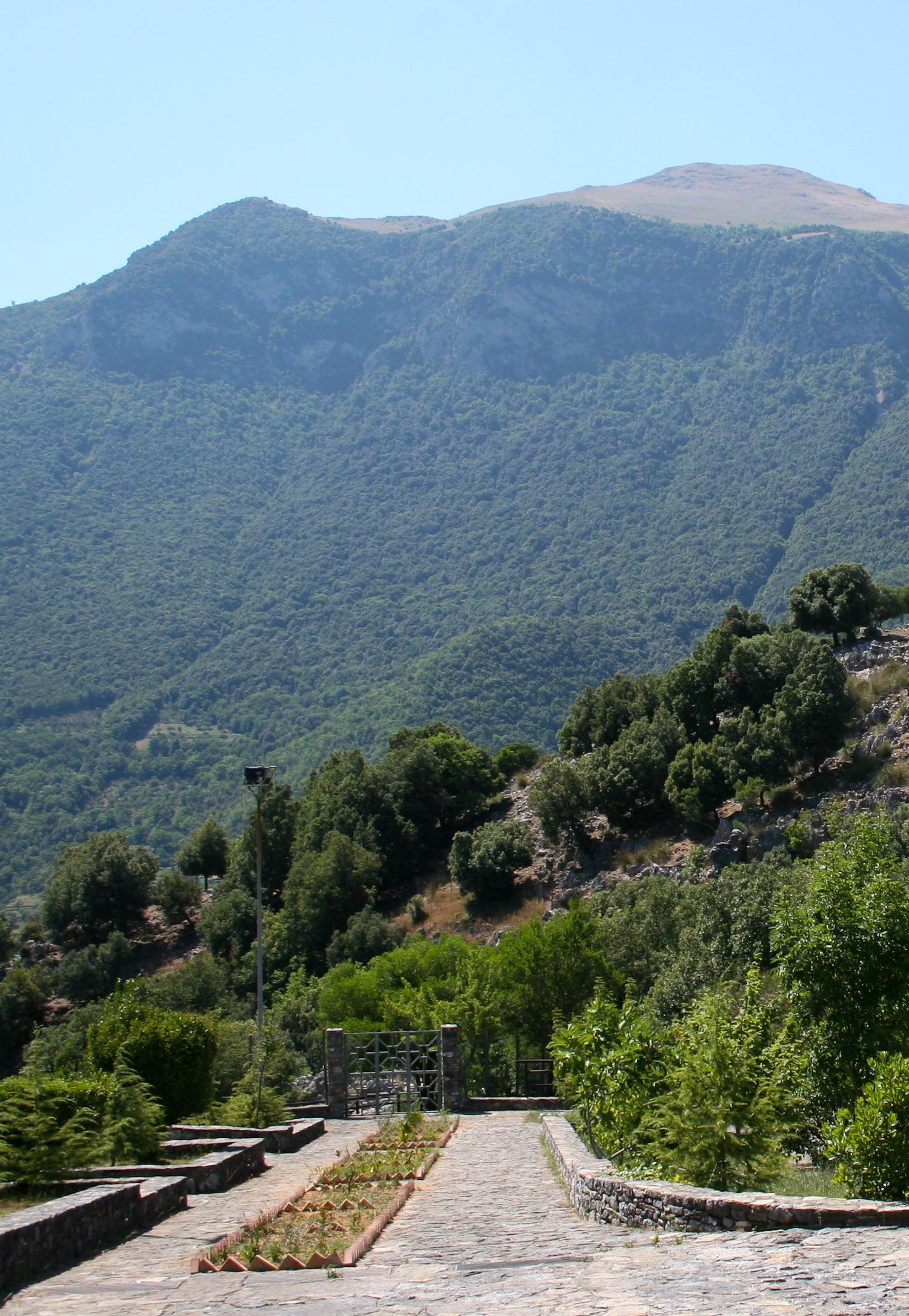 In order to visit the caves you have to drive a long way down a valley on a steep dirt track. The gate marks the entrance to the archaeological area, which will be locked, when the ‘museum’ is unattended.

The drive became slightly less reasonable, the moment we left the main road for a dirt track leading down to the bottom of the valley. Roads in this area are generally full of pot holes, and landslides regularly undermine the tarmac forcing drivers to slalom. Yet the main road could at least accommodate oncoming traffic, whereas the track to the cave had no room to spare. In addition you had to navigate an inclination of 15 degrees and several sharp turns, hiding whatever might be found around the corner, but once you have started there’s no turning back.

I feared ending up with the front wheels over an abyss, but after going straight down for about 15 minutes the dirt track transformed into a huge, empty parking lot with a restaurant and a small house serving as entrance to Grotta del Romito. Behind the desk, a young woman looking mightily hot and bored sold tickets at 2.60 euro, and while we waited for the guided tour to begin we had time to study an unusually informative exhibition with billboards describing the cave and Neolithic peoples’ lifestyle through drawings and explanations in Italian and English providing the kind of background knowledge sorely missed in most other South Italian museums. 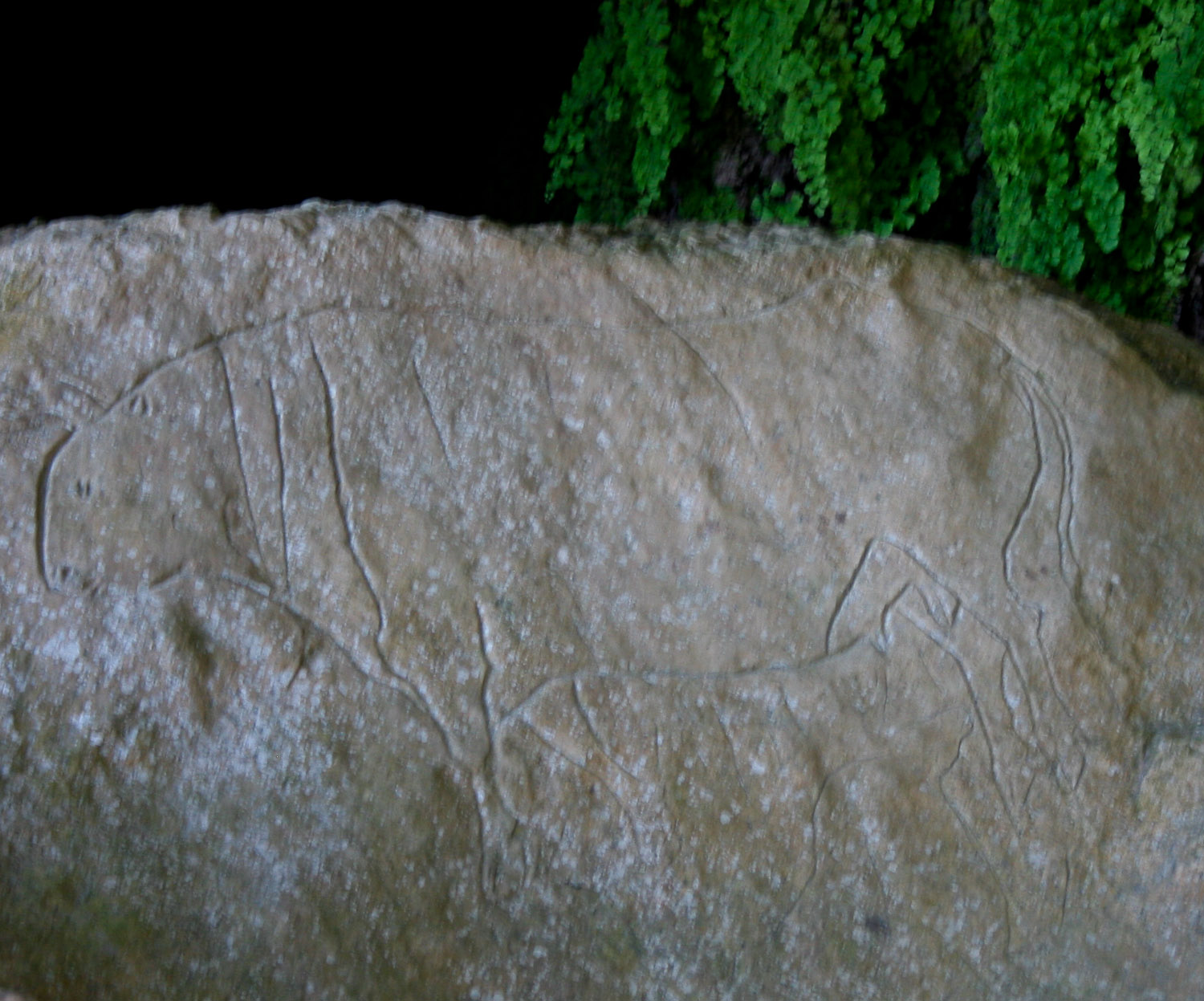 This well-proportioned rock engraving of a bull is considered the highest expression of Paleolithic realism in the Mediterranean region.

Shortly afterwards the young woman turned up with fresh lipstick and woolly sweater that looked weird in the summer heat. The caves can be rather cold, she said, and made me think of deep hollows far below the surface of the earth. Then she unlocked a gate and ran down a steep path, while she talked incessantly and very fast in Italian. She explained that she was an archaeology student and assistant to the professor in charge of the excavations. Grotto del Romito was discovered in 1961, but it takes time to dig out a cave with a teaspoon and paint brush, so the work is far from finished.

In fact, the cave covers little more than 10 square metres, and it is situated at ground level in a damp canyon covered by dense green ferns and trees. Somewhere near by a river stream trickled, but otherwise all was quiet, apart from the guide’s eager chatter.

– Look, there’s il toro with many fine details that Stone Age people carved into the stone. Beside the stone you see skeletons of the two couples, as they looked when they were found. The skeletons seen here are copies – the originals are preserved in Florence – but you still get an indication of how they were placed. With both couples the male and the female lay so close beside each other they appeared to be embracing, the guide explained while pointing to a big rock placed next to four human figures in red clay. 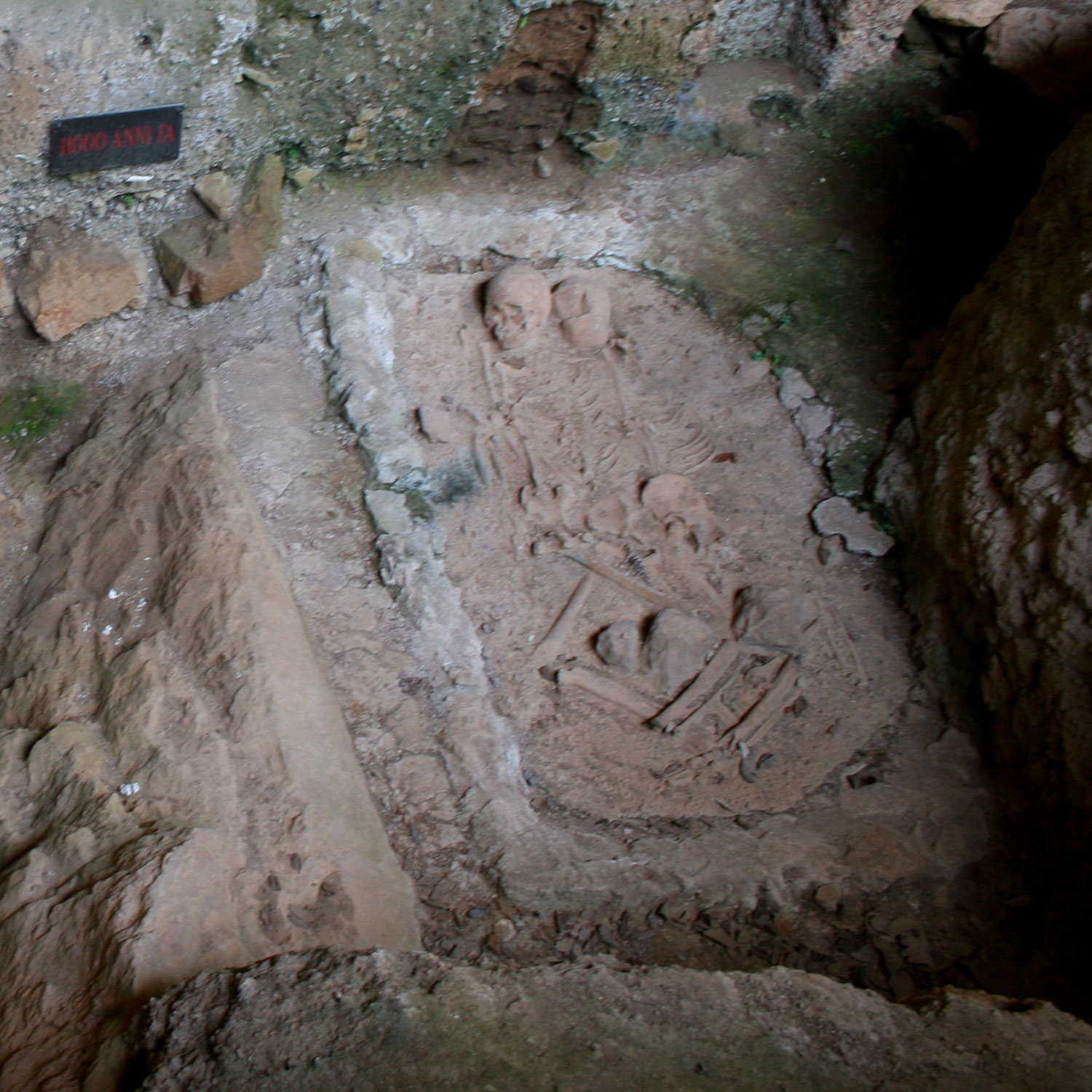 Two of the nine intact, well preserved burials that have been recovered around the Romito caves in Calabria. These skeletons are 9.200 years old. At the time of death, the couple were between 15 and 25 years old and not taller than 1.5 m.

Then she lit some candles and revealed a small opening in the rock. There was barely room for three people inside the cave, where cords and fences betrayed archaeologists’ work in progress. A single stalagmite shaped like a horse marked the entrance, but otherwise there was nothing much to see. A bit disappointing, if you expect to find caves, Stone Age art and stalactites in the plural, but our guide’s enthusiasm and commitment easily outweighed the disappointment. She seemed to regard Grotta del Romito as a world attraction, and she kept repeating that the caves attracted thousands of visitors and numerous school classes. This was just an extraordinarily slow day.

We thanked her sincerely for the tour and went up to the restaurant, where a female dynasty counting at least four generations ruled over a terrace. Inside the restaurant, there were 50 set but empty tables, and a very friendly owner, who served antipasti of local sausages and vegetables; bruschetta with a paste of peperoncini and lardo followed by home-made maccarruni in tomato sauce. A hot, but perfect conclusion to an excursion in the lush, green Calabrian mountains.

Other attractions near the caves in Calabria

Is Manarola the Most Beautiful Village in Cinque Terre?

The Origin of Cured Ham and Melon
Scroll to top