The violent beauty of

the Cathedral of Salerno

From the outside the Cathedral of Salerno looks like a rather plain official building. But venture inside and you’ll find yourself in a treasure trove of fragrant incense, golden stones and embalmed saints.


We might as well have skipped the cathedral and continued walking around the bustling streets of Salerno’s historic centre. The pale yellow front with a tiny door guarded by two effeminate lions does not exactly roar for attention, and if it hadn’t been for a pixie book defense for the Medieval lion sculptor, who had been given the assignment of carving an animal he had never seen from the column of a old Roman villa, we would not have bothered to go inside.

So it was quite a surprise to find a violent history behind the peaceful exterior.

The construction of the Cathedral of Salerno began by order of Robert Guiscard in 1076. After decades of warfare, this Norman warlord and adventurer had become Duke of Apulia, Calabria and Sicily, and he wanted to build a grand monument for himself. So while Robert Guiscard continued fighting, his architects and engineers looted Paestum and the ancient Roman villas of Salerno. They found 28 different marble columns and placed them in a courtyard that connects the outer façade with the church.

The tomb of Saint Matthew the Apostle. The courtyard with looted columns and a bell tower with a whiff of Arabia. And the gilded crypt are among the attractions of the Cathedral of Salerno.

In a corner of the courtyard a square and round bell tower soars, and 56 panels in the heavy bronze door depict stories from Jesus’ life. The courtyard is simple and austere much in contrast to the interior of the cathedral with two pulpits and paintings by Francesco Solimena.

A Pope in red slippers and the destruction of Rome

But it is the crypt that takes your breath away. The crypt is not as old as the foundation of the cathedral, but the decorations are highly original with marble in a thousand different colours used to design geometrical figures on the floor and the vaults. Light, candelabras and gilding give the room a golden glow that shrouds the tomb of the Apostle Matthew and in a glass coffin there’s an effigy of Pope St. Gregory VII in red slippers.

Pope Gregory VII was one of the great church reformers trying to prevent lay investiture, simony through selling church offices and clerical unchastity. His reforms led to a conflict with Emperor Henry IV, and in 1084 Gregory VII was incarcerated in Castel Sant’Angelo in Rome. He asked Robert Guiscard for help, and Guiscard who still had ambitions of conquering new land and saw an advantage in an alliance with the church, marched on Rome, liberated the Pope and literally set the city on fire. After causing such destruction, Gregory VII had to follow Robert Guiscard into exile, and he ended up in Salerno, where he conveniently consecrated Guiscard’s monumental new Cathedral, before he died in town less than a year later.

It is dazzling to think that such a tiny man in red slippers can be so strong willed and leave such an emphatic mark on history. Or maybe it was just the contrast between the bright lights of the Cathedral of Salerno and the twilit alleys outside. 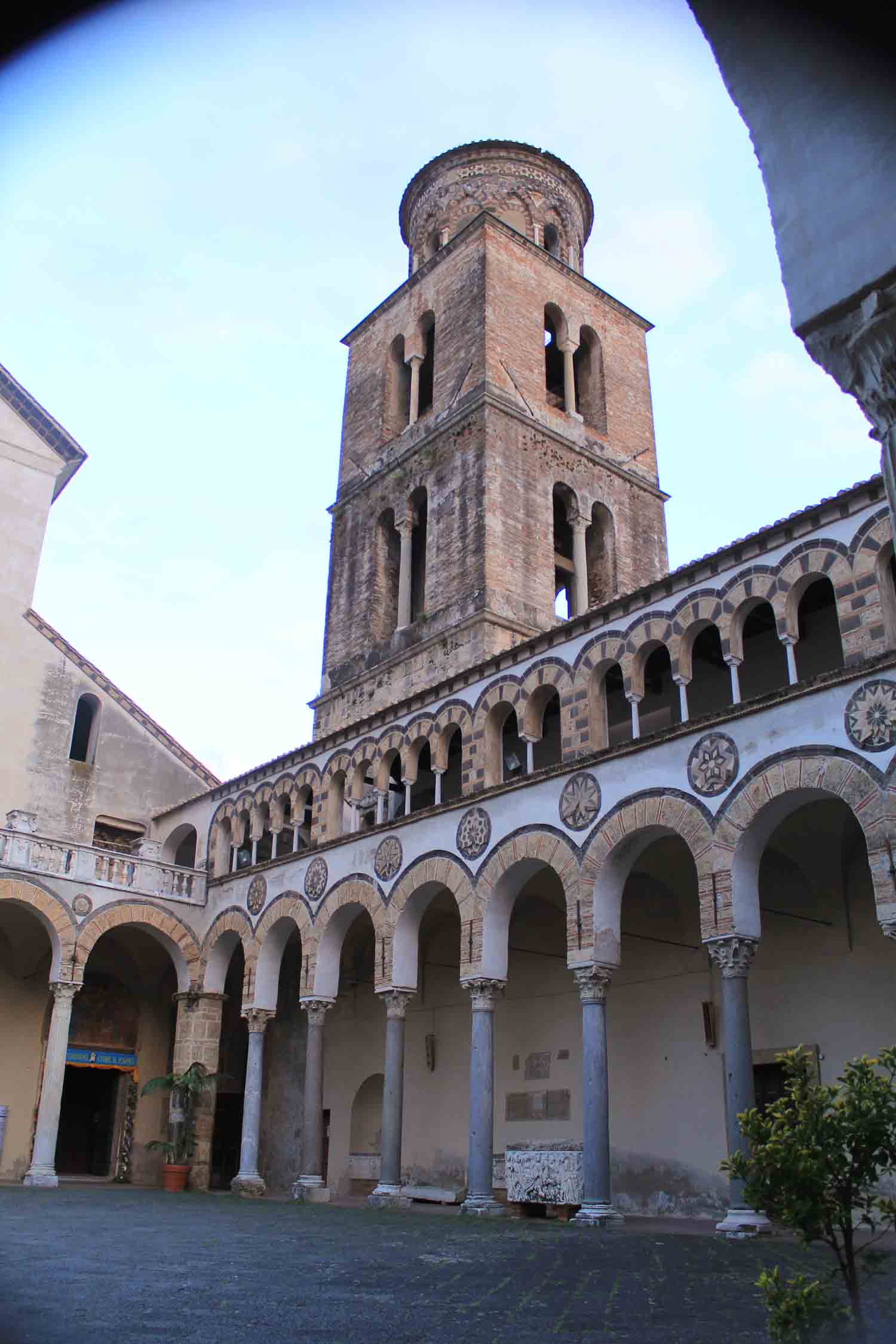 The courtyard with some of the 28 different marble columns that were looted from other buildings.