The opera composer Gioachino Rossini was born in Pesaro 220 years ago. But his genius still resounds all over the city.

Baby dance is an institution in most villagios and holiday resorts in Italy, where all generations singalong to Zecchino d’Oro and the crocodile song.

My children grew up spending a month every summer in Italian villagios throughout the country. Every night, every year and everywhere from Lombardia over Emilia Romagna to Calabria, we seemed to have a crocodile in tow. Campground entertainment’s animazione programme almost always included a ‘Baby Dance’, where pre-teens – girls in particular – could dance around and act pretty on stage.  For some inexplicable reason the soundtrack was always the same and it always culminated with the crocodile song .

This led me to wonder whether “Il coccodrillo come fa?” was ingrained in the Italian DNA. Sometimes on television I still see toddlers and very grown up people flapping their arms like jaws, wiping their eyes, and pretending to read an invisible newspapers in tune to the song. The gestures seem to be universally known and a lot more popular in Italy than Itsy-bitsy spider, contaminating even foreign children with no prior knowledge of the language.

And it is all down to Zecchino d’Oro, a children’s song festival that has taken place every year since 1959. The purpose of Zecchino d’Oro was to encourage composers to write songs specifically for children, the songs were also performed by children at the festival and on national television. In consequence, Zecchino d’Oro songs bridge several generations and remind them all of childhood pleasures, before children became big time media consumers and small Hannah Montana clones.

Hopefully they don’t miss out on the cuddly crocodile, which has served the national identity so well – both as a dancing lesson and as a lesson in Italian language and culture.

Albano Carrisi is a very famous Italian pop singer you might go visit, if you happen to be in the Brindisi area.

Italy has several very attractive opera arenas like the Sferisterio, an opera arena in Macerata, in the central Marche region near the Adriatic coast.

If you haven’t got tickets to the opera in Verona Arena there are  alternatives. Italy has several very attractive outdoor venues,  when it comes to dramatic song performances.

In july we stumbled upon the Sferisterio Opera Festival in Macerata that stages 3-4 popular performances each summer along with a number of other musical events. This year one of the main acts was Madame Butterfly. 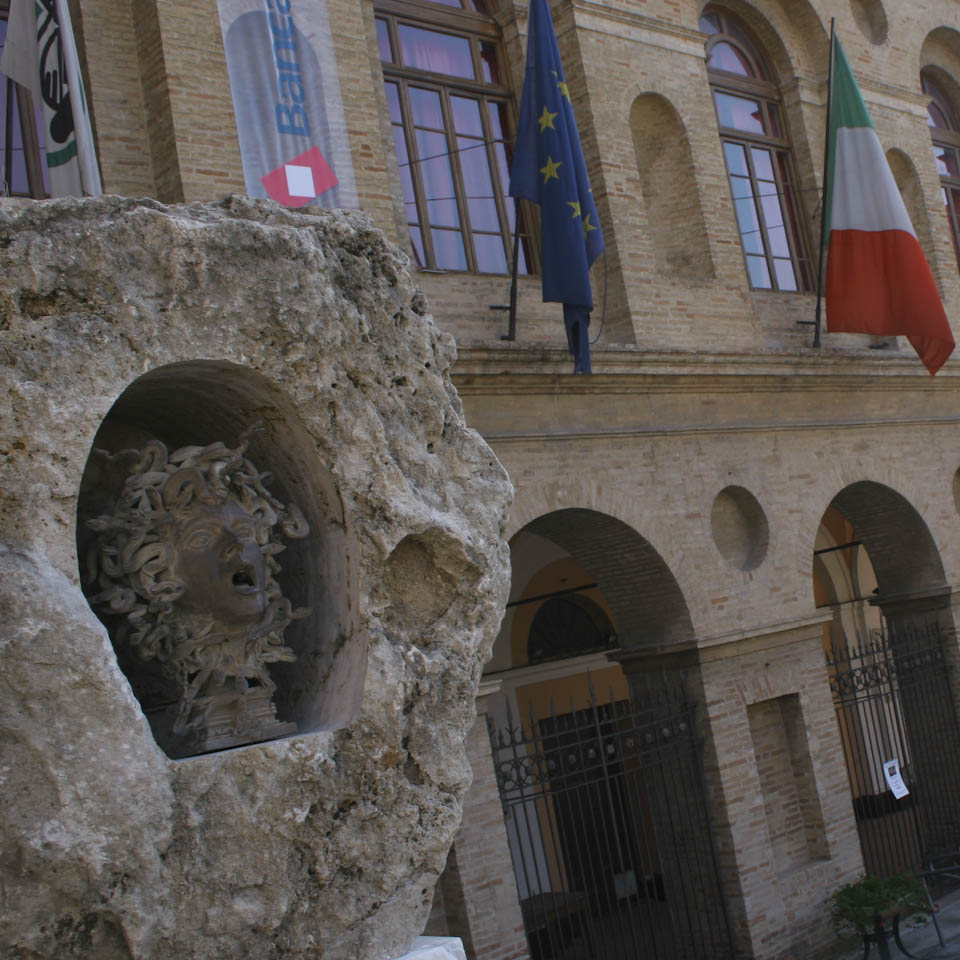 The Sferisterio in Macerata was built in 1829 as a stadium for an Italian kind of handball, circuses and bull fights, but today it has a reputation as the open air theater with the best acoustics. The arena is formed as a half circle with a very tall and long wall behind the stage. It is surrounded by arches and columns carrying a double row of boxes, and a stone gallery with seating for more than 3 000 spectators. A perfect neoclassical setting for a night out in Italy.

The poet of Recanati

Sasso Marconi: Where radio was invented. A suburb to Bologna in Italy has been renamed after Guglielmo Marconi who invented the radio.

Now Sasso Marconi is not a place you would normally choose to visit, unless you want to experience Bologna in high summer without having to survive the humid heat that settles over this part of the Po Valley, especially in the evenings. Sasso Marconi is situated on the Setta river right where the Apennines rise with promises of a cooling breeze, but the town is not much more than a sleepy suburb in scenic surroundings, 15 minutes’ drive from Bologna.

The most interesting aspect about Sasso Marconi is in fact that the city has not always been known by that name. Until 80 years ago, the municipality was called Praduro e Sasso, but in 1935 it changed its name to Bolognese Sasso and in 1938 it became Sasso Marconi after Nobel Prize winner Guglielmo Marconi, who was born and lived most of his life in Villa Griffon in this town. Small European cities rarely contribute to this kind of personality cult, but the date is probably significant as is the fact the Guglielmo Marconi was a close friend of Benito Mussolini.

When Marconi died, 63 years old, in 1937 he had a state funeral, and all radio stations throughout the world observed two minutes’ silence. Marconi is – at least according to the Italians – the person who invented the radio, and this might explain the honour.

Forty-three years earlier in 1894 Guglielmo Marconi began to experiment with wireless telegraphs, and he managed to send and pick up a signal over a distance of 1.5 kilometers from Villa Griffon. In 1896 he traveled to England to obtain funding for his invention, and he soon became famous on both sides of the Atlantic. He established Marconi International Marine Communication Company, which made it possible to maintain radio contact with ships. And in 1909 he received the Nobel Prize in physics.

Today, radio nerds can study the Marconi collection on the award-winning Internet site “Marconi Calling” or visit Museo Marconi, where the inventor’s work tools, equipment and experimental setups are exhibited. which also houses the Marconi’s mausoleum. As a tribute to a great and not quite forgotten Italian.