As a special service Catania offers sightseeing guides for the blind. Yet the pavements render the city inaccessible for most disabled people

Although Catania hardships include lava flows and earthquakes, a few ancient relics have been preserved. Anfiteatro, the Teatro Romano and l’Odeon from the second and third century BCE still exists though by now they are surrounded by busy roads, housing estates and Benetton shops. Many other Italian cities have similar arenas with seating piled up in stone. It is nothing out of the ordinary.

Yet I was amazed to see that the city council had not only placed a sign at the Greek theater detailing what kind of anciet remains we were starring at. They had also taken the trouble to translate the text to braille, leaving a lot of fine small dots to massage your fingertips. The idea of showing respect to the blind and disabled people is sympathetic, and unfortunately also somewhat unusual in an Italian context, but I can not help but wonder what joy people with partial eyesight will get from knowing that behind a fence ten metres in front them, there is a hole where some people 2000 years ago placed a pile of stones.

Maybe they would much rather have had a accessible sidewalk, so they did not have to lift their feet half a metre to climb the curb? 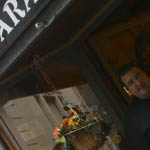 A stop on Via Traiana Italy
Scroll to top