A Tribute to Tolerance

The Cappella Palatina is one of nine Arab-Norman structures in and around Palermo that celebrate religious and ethnic tolerance.

One of the main sights of Palermo is the Cappella Palatina: A relatively small, medieval chapel deep inside the Royal Palace that illustrates the peaceful coexistence of people from different cultures and with different languages and creeds.

Cappella Palatina has the cruciform ground plan characteristic of Christian architecture but with a Byzantine dome over the altar. The mosaics covering all vertical surfaces alternate between religious images and non-figurative patterns; the Greek, the Latin and the Arab alphabet is used side by side; candlesticks by the pulpit exhibit a Norman tradition, and the carved and gilded wooden ceiling is typical of Maghreb stalactite decorations. UNESCO World Heritage describes Cappella Palatina as

“… an example of a social-cultural syncretism between Western, Islamic and Byzantine cultures on the island which gave rise to new concepts of space, structure and decoration. They also bear testimony to the fruitful coexistence of people of different origins and religions (Muslim, Byzantine, Latin, Jewish, Lombard and French).”

Star-shaped panels were carved and painted by craftsmen from Northern Africa. Inscriptions in Arabic line each star.

The Conquest of Palermo

This fruitful coexistence followed centuries of internal strife and unrest. The Arab rulers of Catania and Syracuse were at war with the emir of Agrigento, and in 1060 they asked a group of Norman warriors for assistance. The leader of these mercenaries was called Roger and after ten years of continuous fighting with both Muslims and Christians in Sicily, he conquered the capital Palermo. The Arabs capitulated on condition of being granted the right to practice their own religion and maintain their own laws and system of justice.

With bravery, cunning and diplomacy Roger managed to secure the support of his former opponents, and eventually he became the undisputed leader of a united Sicily and one of the most powerful Mediterranean counts.

Gradually, Roger and particularly his son Roger II built up a new and powerful state, and in 1130 he celebrated his undoubted strength by obtaining papal recognition to raise his countship to kingship. On Christmas Day 1130 Roger was crowned King of Sicily, Calabria and Puglia in Palermo cathedral.

The coronation was just a formal confirmation of the actual state of affairs, but the grandiose performance in Palermo undoubtedly strengthened his position. A strong leader was needed in order to make Christians and Muslims live peacefully side by side, and Roger II had a hard time protecting the most pious from both religions against each other. Furthermore, Sicily was a trading station attracting people from all parts of Europe and the Mediterranean region, and some of them were more than willing and able to fight for additional possessions and privileges. 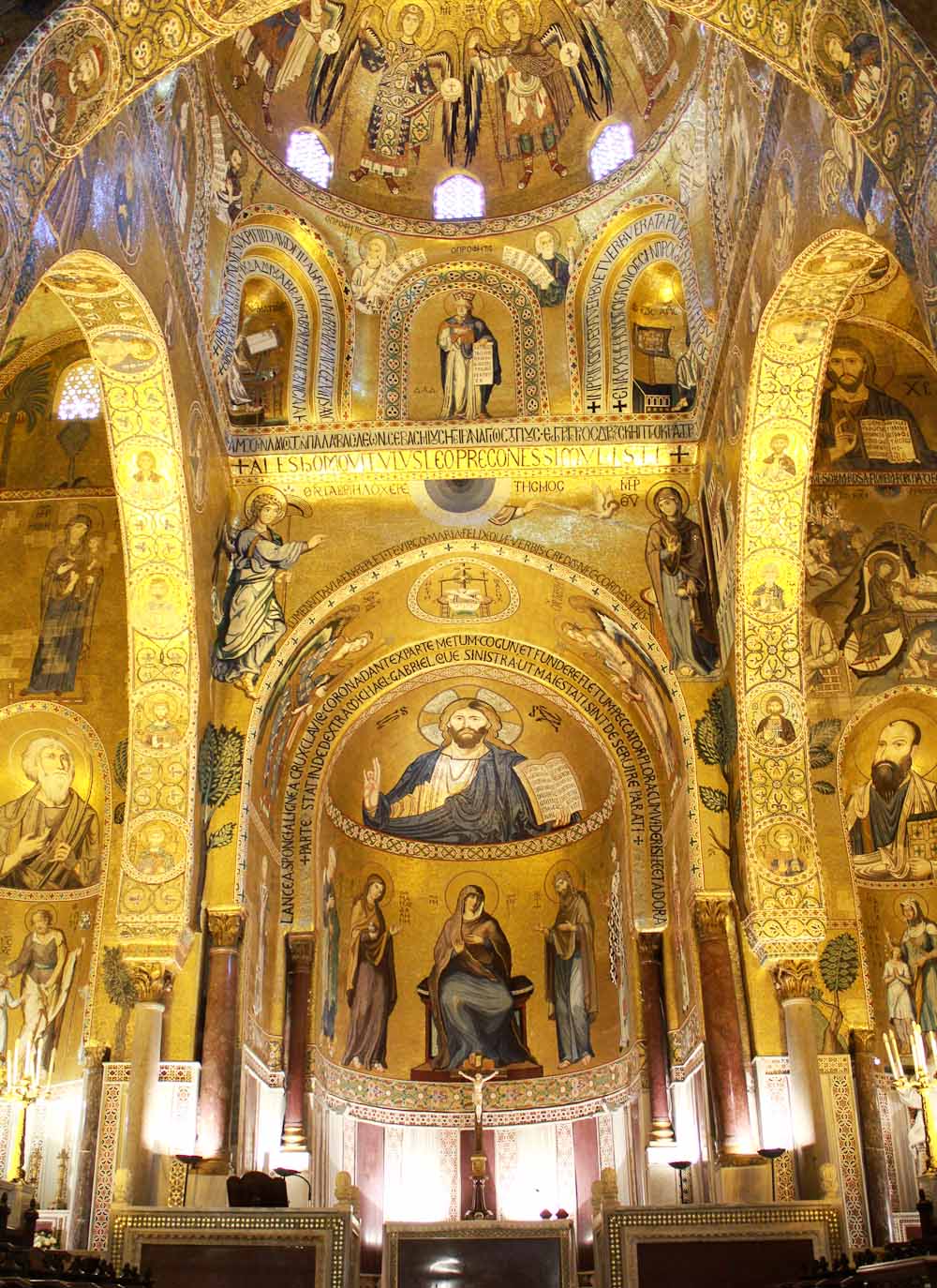 Cappella Palatine with its eclectic mix of techniques, symbols and alphabets.

In order to bridge the social, religious and linguistic diversity, various leaders were invited to regular council meetings that became a permanent institution known as the Sicilian Parliament. The Sicilian Parliament was seated in the Royal Palace or Palazzo dei Normanni, just beside the Cappella Palatina.

Roger II also established a strong central administration. The army, navy, judiciary system, tax collection and religious practices were controlled by officials, regardless of race and religion. The administration included Normans, native Sicilians, French, Italians and Greeks as well as Muslims, Christians and Jews from Syria, North Africa and Spain. Many of them came from humble backgrounds, but they were all treated equally and their administration was based on the idea that everyone had the right to live in his own way. 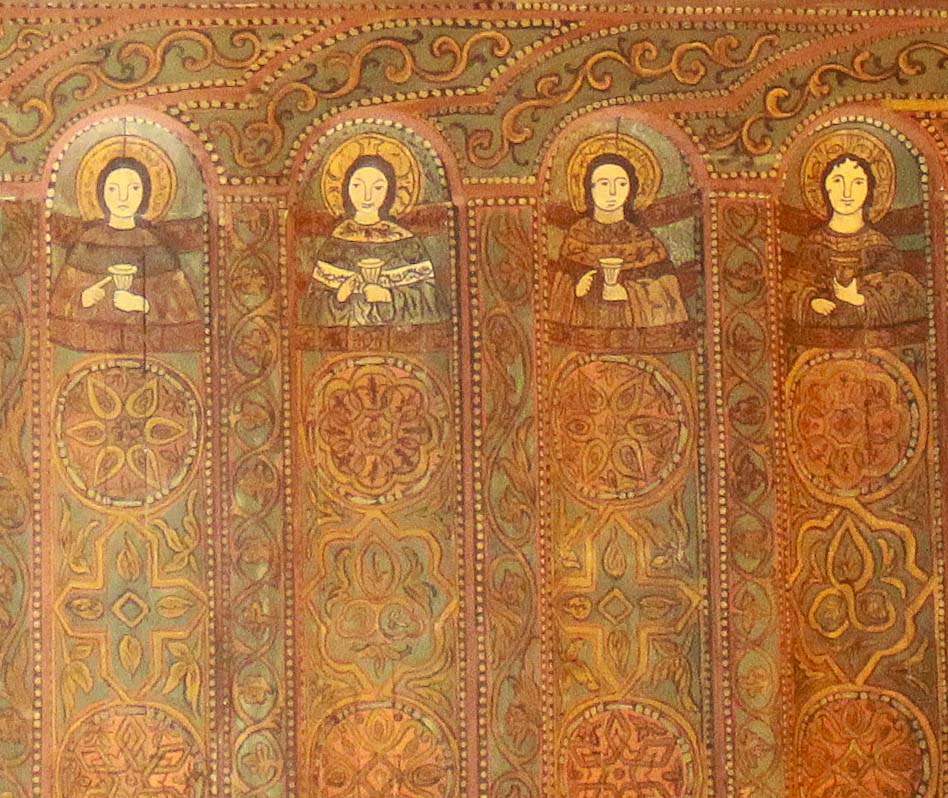 Detail from the painted wooden ceiling.

This kind of tolerance was not common in the Middle Ages, but in Sicily it was a necessity, and Roger II and his administration managed to bridge the diversity and create a relatively peaceful, coherent society in spite of a whirl of different customs, that meant that the Muslims had the right to be judged after the Koran, the Christians according to Justinian’s Codex or the Law of the Lombards, Normans and others in accordance with the rules of law in their place of origin. At least five languages were spoken: Arabic, Latin, Greek, Italian and French and royal decrees had to be broadcast in several languages and dated according to Muslim or Christian calendars. Even the coins were diversified and minted to reflect the characteristic preferences of different religious groups.

This extraordinary political accomplishment is reflected in the Cappella Palatina and adds extra glory to a enticing site of medieval magnanimity and tolerance.