Birds Along the Tiber in Rome

For Romans the birds along the Tiber are an annual plague. Droppings from migrating starlings make the pavements slippery and hide cars under a disgusting crust of guano.

In autumn and spring, starlings en route to and from Africa can be seen all over Italy. Just before dusk when the light fades enormous bird clouds perform enticing dances to black out the sun. But people in the big cities find it hard to see the beauty, when large flocks of  starlings commute back and forth between their nests in the cities and ‘work’ in the country in view of the mess the birds leave behind.

The Most Common Bird in Italy

According to the Italian Ornithological Association (LIPU) starlings are most common bird in Italy in winter, and in autumn they have been counted to make up two-thirds of the feathered population, followed by wild ducks and finches.

Starlings breed in Northern Europe in the summer and return to the countries around the Mediterranean Sea in the winter months. The migratory birds prefer to nest in town due to the urban heat and good accommodation in parks and street trees. By day, they commute to the countryside to find food in vineyards and olive groves. 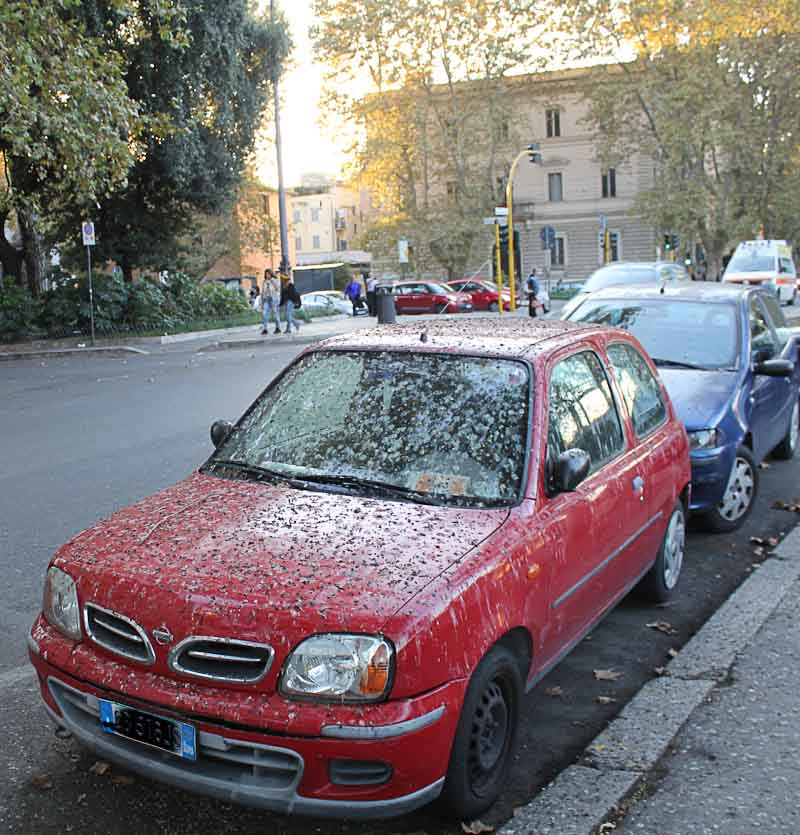 Car parked under the trees lining the Tiber river in Rome

Plague Birds Along the Tiber

In March and April the starlings return to countries with a cooler climate, but their five-month stay in Italy is not without problems. The noise along tree-lined promenades can be unbearable, some neighbourhoods in Rome and Naples experience a dangerous mess of bird droppings, and large flocks of birds regularly disrupt traffic and cause accidents.

For instance, the combination of bird droppings with rain makes Rome’s cobblestoned streets extremely slippery for the two-wheel drivers. In fact the Romans are so fed up with the birds that they try to scare them away with CDs playing load starlings-alarm signals and the installation of powerful searchlights in the trees. Still, it scare tactics do not seem to have any major effect in the long term.

Thousands of starlings commute between the countryside and their nests in the cities.

Apparently, Italian city-dwellers will have to live with a teeming population of birds along the Tiber during winter, but they may find comfort in the impressive sight of large flocks of starlings flying in formation above country roads. Small scale ‘black sun’ phenomena can be observed both in the morning and the evening, as birds and humans tend to commune simultaneously between home and work.

Other notes on animal life in Italy

A stop on Via Traiana Italy