” Beppe Severgnini makes merry over the Italians’ desire to find creative and exotic names for their hotels, bars and restaurants. Mostly inspired by distant places:

Reading this amused me quite a lot, and a few days later I came across an example in the real world.

Just arrived in Catania, we were looking for a place to sleep, and just off the main street, pedestrian streets, the police station and the closed market, we caught sight of a first floor apartment with some flags and a sign saying “Bed & Breakfast Astrid”. The location seemed more or less perfect, although we were a bit reluctant to seek accommodation with what we took to be Swedish / Danish / Norwegian ex-patriot but we did ring the door bell, and were met by a speed-talking middle-aged woman.

– We do have a vacant room, and you are welcome to stay here overnight, but there is a small problem. There are builders in the house, and they have just cut off the electricity, and to tell the truth, I don’t know whether they will get it fixed in one hour, tonight or tomorrow. In other words, we have no light and air conditioning, but if you are willing to accept these conditions, I can make you a good offer. Should we say 30 euros for the night? I promise to put up candles, so you can find your way around. It will be really memorable and very romantic, she promised.

We were persuaded by her charm, the price and lack of imagination. I was totally convinced that the power cut could not last more than a couple of hours, so we accepted the offer, received a key and made an appointment with the hostess to have breakfast at 8 the next morning. When we returned around midnight, Christmas candles flickered in the hall, on the night table and in the bathroom, but apart from that the place was enveloped in pitch darkness, which made it rather spooky, but also very special and a bit of a contact lens challenge.

Next morning I heard the woman tiptoe around at 6:30, but by 8 am, neither she nor her two adult sons were anywhere to be found. Eventually we had to face the fact that breakfast consisted of the supermarket brioche and juice left in the room.

We left 30 euros on the dresser and hoped that the money would help the otherwise sympathetic family to pay their electricity bill, so they would not have to hide from their visitors in the future. But before shutting the door behind us, I could not help smiling at the hostess’ remark the day before, when I had asked if she was Astrid and if she had any connection to Scandinavia?

– Oh no, she replied, surprised. My name is Pina, and I was born and raised in Sicily. Astrid is just a concept, I created, because I wanted something new to happen in my life. In my opinion Astrid sounds really great with Bed & Breakfast.

When you have found a B&B Catania Sicily you might also want to see:

Hikes on mount Etna – the edge of an active volcano

Ferry to Sicily: Whirlpools around the Strait of Messina 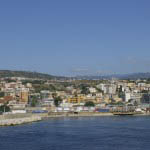 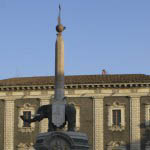 Elephants in Catania
Scroll to top