I’d never been on a dedicated Barolo wine tour before and didn’t really know what to expect, when our tour bus stopped by a winery on a country road in La Morra.

In the distance, villages like Santa Maria, Annunziata and La Morra could be seen, but apart from that, green, combed hills of nebbiolo wine, mulberry trees and round hazelnut bushes dominated the Piedmont landscape.

A tiny, inconspicuous plaque on the wall of what appeared to be a rather ordinary looking family house indicated that we had come to a ‘Cantina’ and ’Ristorante’. We were greeted by Paolo Gagliardo, the youngest son of the Gianni Gagliardo winery, and led downstairs to see the cellars. 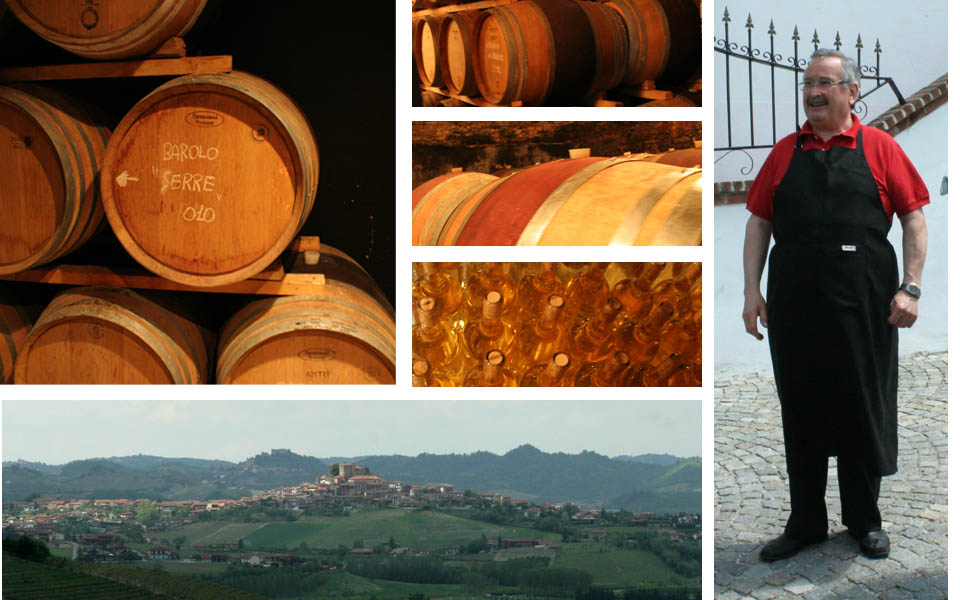 Pictures from the winery and the surrounding landscape. The cook welcomed us in front of the restaurant.

A guided tour of the cellar

Paolo guided us through the dark, musty rooms filled with barriques and patiently explained about fermentation, vinification, the types and sizes of casks, temperatures, blends, lables, vintages, and single vineyard wines.

The family has several vineyards all over La Morra and a long tradition for winemaking dating back to Paolo’s maternal grandfather. His father, Gianni Gagliardo, entered the trade my marriage and developed the business, which is now being taken over by a new generation. Paolo’s elder brothers, Stefano and Alberto, have both joined the company as head of the winery and the vineyard.

Time for a tasting

After about an hour among the barrels, a cook in a red polo shirt served a so-called ‘light’ lunch starting with Insalata russa and followed by homemade pasta with a filling of local cheese and butter sauce. The dish was called Fagottini di Raschera al burro fuso and it was tongue-meltingly delicious. The meal ended with a bonet chocolate pudding made with crunched amaretto biscuits. Nice. As was the tastings of white Fallegro, red Barolo Serre and the Dolcetto d’Alba and Asti Muscat that accompanied the food.

After such a treat I’ve definitely developed a strong taste for La Morra and Barolo.

If you are on a Barolo wine tour, don’t miss:

Italian Notes was a guest of #BITEG and the Piedmont Tourist Board but all opinions and mistakes are my own.