The real Santa Claus rests in a crypt under Basilica di San Nicola in Bari, where the tomb of Santa Claus has become one of the main attractions.

I have seen Santa Claus – and I am not talking about the coca cola branded pot-belly who haunts department stores and shopping malls with his white ho-ho-ho beard from mid-November.

My Santa Claus is a real saint. His remains – or rather a tomb within a tomb within a tomb containing his remains – can be seen on a silver altar in a crypt under the Basilica di San Nicola in Bari. The old corpse still emits body fluids that have been known to effect miracles over the centuries, and therefore this liquid which with a slight euphemism is known as myrrh or manna can be bought in small bottles from the church souvenir store. 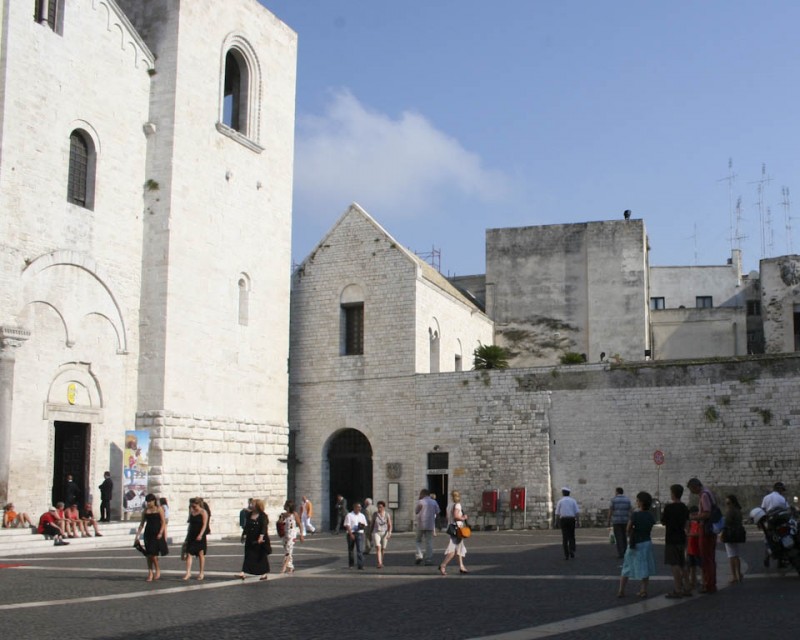 Legendary Miracles
As patron saint of sailors, fishermen, children, merchants, thieves, wolfs, Russia and pawnbrokers, it is not only around Christmas Saint Nicholas enjoys a large following. He has a reputation for secret gift-giving, and his miracles are legendary.

For example he is supposed to have resurrected three children, who had been slaughtered and cured by a butcher planning to sell them as ham. He made anonymous donations of gold coins to three young girls, whose father was too poor to raise a dowry. And he refilled a shipload of wheat, so that the population of Myra could actually eat their cake and have it.

From Turkey to Italy

The popularity of the saint was so great that Italian Catholics felt entitled to steal – or save – his bones from their original burial ground in Asia Minor.

St. Nicholas lived in a small town near Antalya in Turkey from 270 to 347 AD , and when he died, he was buried in a local church. Around the turn of the first millennium Turkey converted to Islam, so sailors from Bari, who had delivered wheat to Antiochia further East on the Turkish coast, offered to buy the relics of St. Nicholas from the Greek monks guarding the sanctuary.

The Greeks turned down the offer with moral consternation and tried to scare the Italians off with reference to divine anger and revenge, but some of the braver sailors nevertheless broke into the grave. Here they found a marble urn or sarcophagus containing the nicely scented fluid called “manna di San Nicola”, and one of the sailors had to immense himself in the holy water in order to extract the bones and skull of the saint. After this deed the grave robbers fled, and they managed to bring the relic home to Bari. 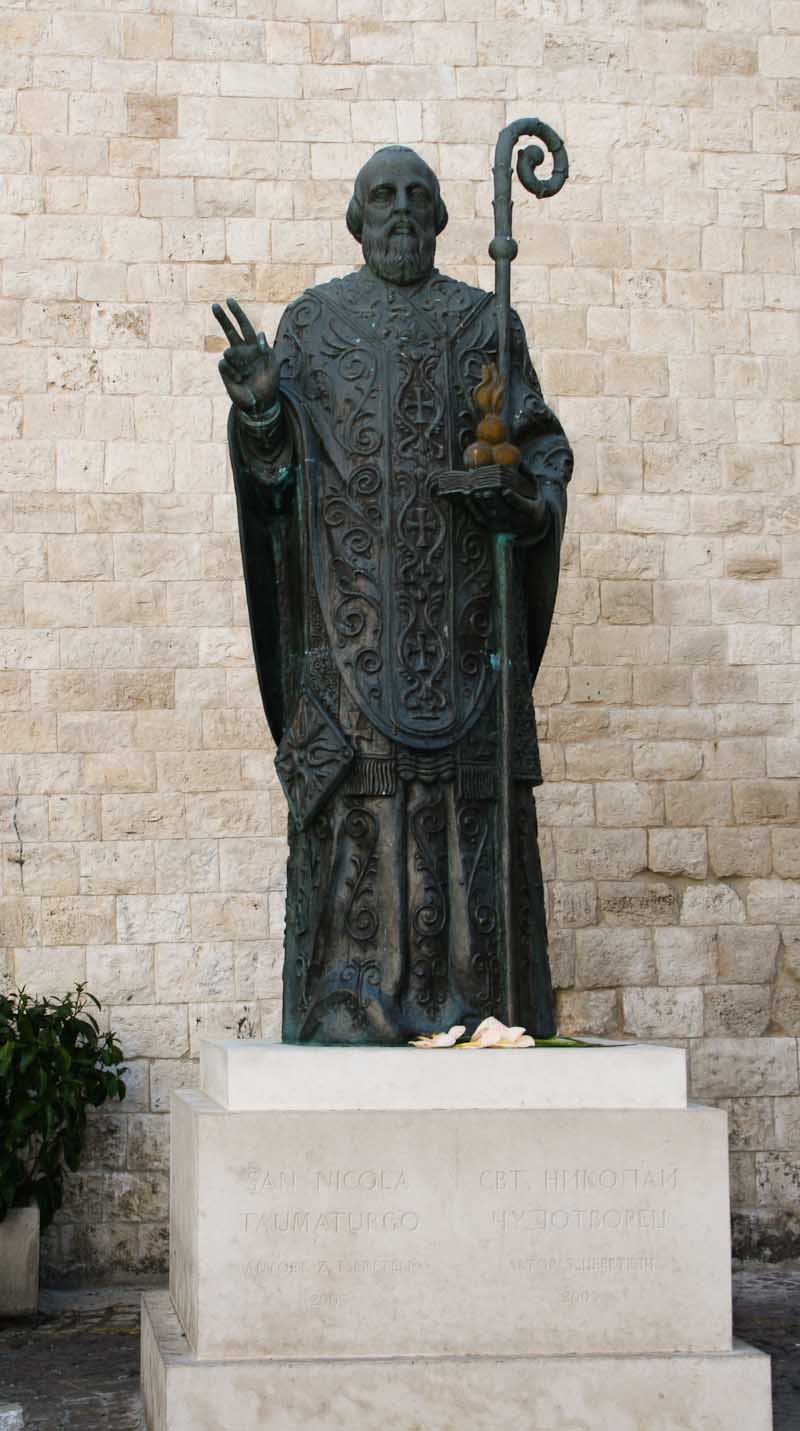 Statue of St. Nicholas outside the cathedral.

The Arrival in Bari

In May 1087 the remains of St. Nicholas arrived in Puglia amid great celebrations. An ox cart was set up to pull the saint’s coffin to the cathedral, but near the harbour the animals suddenly stopped, and it was decided to build a special Basilica for San Nicola on this exact spot.

In consequence, the animals depicted at the Lion’s Portal are not just lions but oxen that have lost their brass horns. And if you take a close look at the walls of the Basilica you will find funeral inscriptions of the 18 sailors who brought the saint from Turkey to Italy.

Inside the church there’s a much venerated statue of St. Nicholas, and downstairs in a beautifully vaulted crypt the bones and fluids of the saint are kept in a highly protected tomb. This tomb is opened but once every year to extract manna, a ceremony marking the end and culmination of the annual festival for St. Nicholas.

This festival takes places from May 7-9 to commemorate the arrival of the saint in Bari, and it attracts thousands of pilgrims, who wish to pay tribute to St. Nicholas and witness the procession on May 8, when the statue of the saint is carried down to the sea and sailed across the marina in a fishing boat.

But the statue always returns to its position in the church from where is has protected Bari from all sorts of dangers including the allied invention during the last World War, followed by German bombings and the explosion of an American ship with a cargo of ammunition in the nearby harbour. Episodes proving that the sacred relics of the real Santa Claus still work magic.