In England this delicious dessert would be known as a Bakewell tart with rhubarb mousse, but as Wikipedia observes there is no evidence that it originated in the town in Derbyshire. In fact, it could well be an Italian invention.

The word frangipane is (still according to Wikipedia) derived from frangere il pane, which means “that breaks the bread” in Italian. It could also refer to the noble Frangipane family, who briefly governed Rome from 1107–1108. Some say that a member of this family, the botanist Muzio Frangipane discovered the delicious fragrance on a trip to Antigua. Others claim it was a perfumer by the name Frangipane, who developed the fragrance to cover the smell of leather from gloves and shoes. And then there are those who maintain that the cake was invented by a young widow of Graziano di Frangipane as a gift to St. Francis.

Anyway, tarts filled with a mixture of egg, butter and ground almonds have been cherished in Italy and France for centuries, often accompanied by various fruits and cream, and as other recipes like the marzipan covered rhubarb cake goes to prove it is just perfect in combination with a rhubarb mousse. So fragrant, sweet and fresh it is simply irresistible.

Soak the gelatine sheets in cold water
Clean and cut the rhubarb stalks in pieces.
Split open the vanilla pod, scrape out the seeds and save them for later.
Put the pieces of rhubarb in a stock pot with water, sugar and the whole vanilla bean.
Let it simmer under lid for 10 minutes.
Drain the rhubarb in a sieve
Remove the pot from the heat and leave it to cool for 5 minutes.
Add vanilla seeds and soaked gelatine to the liquid and discard the rhubarb meat or use it as a jam layer in the Bakewell tart.

Meanwhile prepare the shortcrust pastry.
Sift the flour and powdered sugar into a bowl and add cubes of cold butter.
Rub the butter in with your fingertips to make a mixture resembling fine breadcrumbs.
Add half a beaten egg and use the egg to assemble the breadcrumbs in a firm dough.
Cover the dough in cling film and leave it to rest in the fridge while you make the frangipane.

Cream butter and sugar with an electric mixer
Add eggs almond flour and plain flour.
Grease a loose bottomed tart pie pan (22 cm) with butter.
Roll out the shortcrust pastry between the cling film and a sheet of baking paper.
Remove the baking paper and use the cling film to transfer the dough to the pie pan. The dough is quite soft, so you can easily patch it up, if it breaks.
Fill the pie shell with a layer of strained, boiled rhubarb.
Pour the frangipane mixture on top.
Bake the Bakewell tart at 175 C / 350 F for 25 minutes, until it has turned golden brown.

Whip the double cream moderately firm and foamy to make the rhubarb mousse.
Stir the skyr smooth and gradually add the cooled rhubarb liquid.
Fold whipped cream into the mixture and pour it into a non stick springform pan – use a clear cake collar if you want the edges to be sharp.
Place the mousse in the freezer for 3 hours. 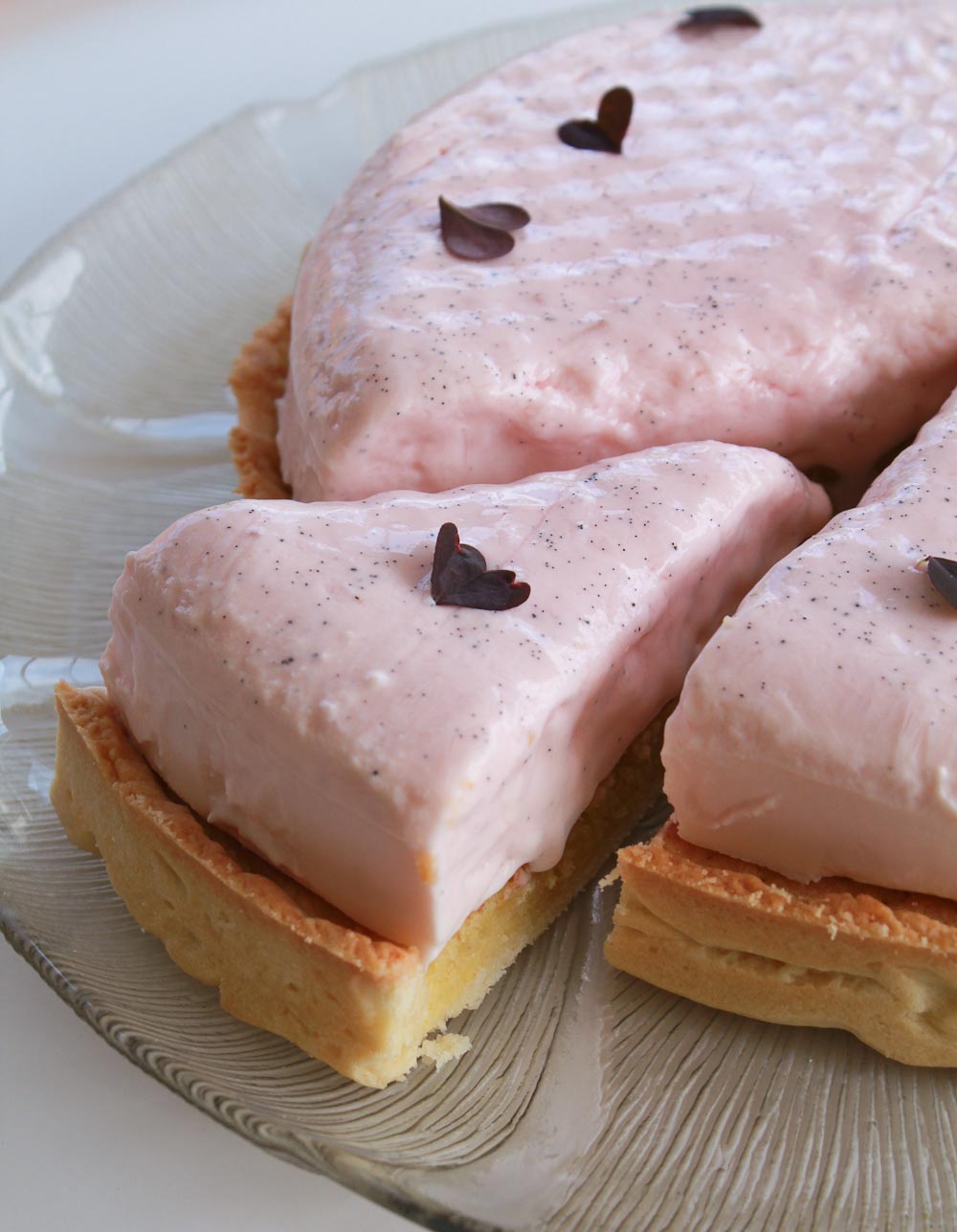 Spoil yourself and your family and friends with this deliciously sweet and fragrant Bakewell tart with rhubarb mousse. 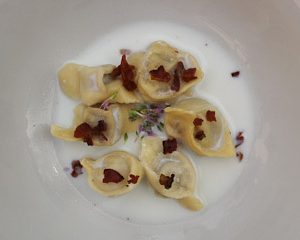 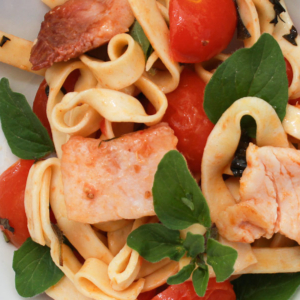