Seeing the Aqueduct of Vanvitelli blocking a chaotic country road East of Caserta is like a mirage. The grandiose three tier structure stands out as an engineering feat at odds with the surroundings.

The Aqueduct of Vanvitelli – also known as Carolino Aqueduct in honour of the King Charles III of Bourbon – was constructed in 1753 -1769 with a purpose to bring water to the fish pond, the fountains and the cascades featured in the gardens at the Royal Palace of Caserta. Along the way, it also managed to provide water to a few mountain villages, irrigation to the flatlands and augmenting the flow in the aqueduct that supplies water to Naples.

Architect and engineer Luigi Vanvitelli from Napoli was the mastermind behind the palace and the aqueduct. His baroque and neoclassicistic style combined with a highly developed sense of scenographic drama had earned him the commission.

A Calm But Steady Flow

The watercourse takes water from springs near Bucciano in the province of Benevento and carries it 38 km mostly underground to the palace. All along the way, it drops only half a millimeter for each meter of length, providing calm but steady flow. It took the water four hours to run from the source to the fountains. 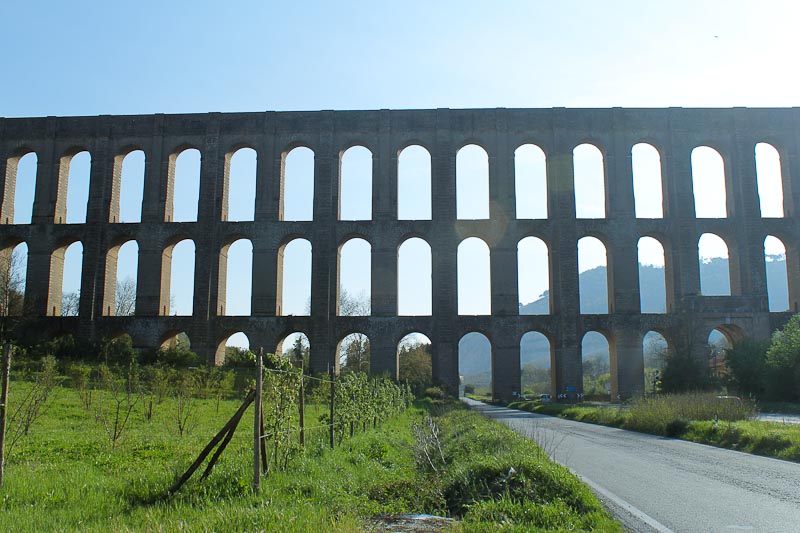 The impressive three tier Aqueduct of Vanvitelli seen from a dirt track along the shoulder of the road to Telese.

Ten km from Caserta, a 529 metre long and 55 metre high aqueduct was erected to bridge the Maddaloni Valley. At the time this was the longest bridge span in Europe, and it was sustained by three rows of 19, 29 and 43 arches. The structure was modeled on ancient Roman aqueducts that were found to have an extraordinary beautiful regularity.

The Aqueduct of Vanvitelli features on UNESCO’s World Heritage list along with the Royal Palace of Caserta, but most visits are due to disappoint.

There are no places to stop and observe the majestic aqueduct apart from an unauthorized dirt track along the shoulder of the busy road to Telese. At least none that we could find with just a map and a guidebook to help. And although the sight is highly memorable and impressive, you leave shortly afterwards feeling you’ve missed out on something. At least that was my experience, but hopefully one of you will know of a better way to admire the aqueduct and leave a comment.

Pointed cabbage salad with fennel and cucumber
Scroll to top