The Square of Miracles in Pisa

There’s more to see on Piazza dei Miracoli in Pisa than the the world famous Leaning Tower. The Baptistery, the cemetary and the cathedral are all part of the miracle.

The atmosphere at the Piazza del Duomo also known as Piazza dei Miracoli in Pisa can be frantic in an airport kind of way. The area is UNESCO World Heritage and at the height of the season, there are so many people rushing around with a sight to catch, you almost forget to enjoy the wonder of so many artistic and religious miracles within such limited space. 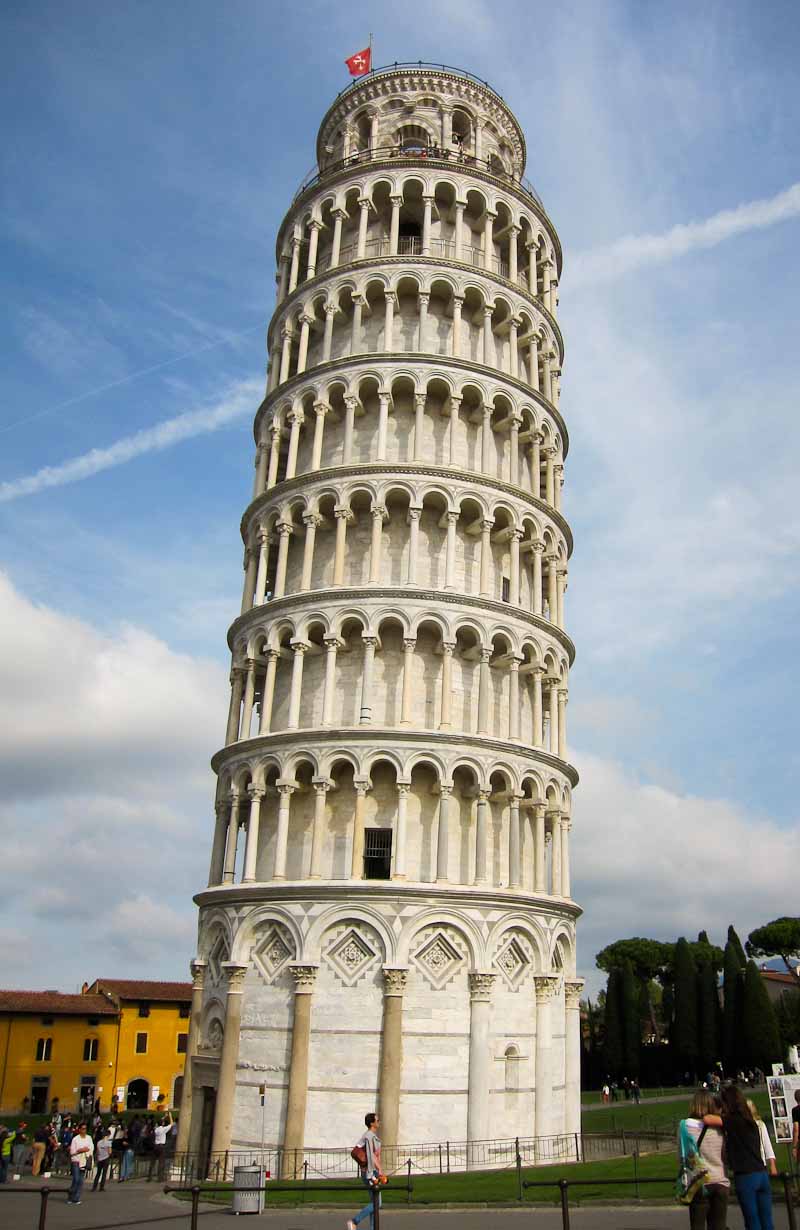 Adjusting the height of the columns could not straighten the Leaning Tower.

Discovering the Laws of Gravity

It’s almost 1000 years since the building of Pisa’s cathedral began, and the bell town was in trouble from the start. Inadequate piloting and shifting soil caused the tower to lean before it was completed, and even though subsequent builders tried to compensate for the initial flaws by adjusting the size of the columns in the upper five of the eight tier tower, the optical illusion did not quite solve the problem. The leaning increased year by year up to the present 5 metres off the perpendicular.

This has kept modern scientists and engineers busy alternating predicting the fall of the bell tower and devising strategies for its correction. Galileo dropped a ball from the top and discovered the laws of gravity. And tourists have done their bit by trying to push the tower to an upright position in front of the camera. The leaning tower of Pisa is a world of fun. 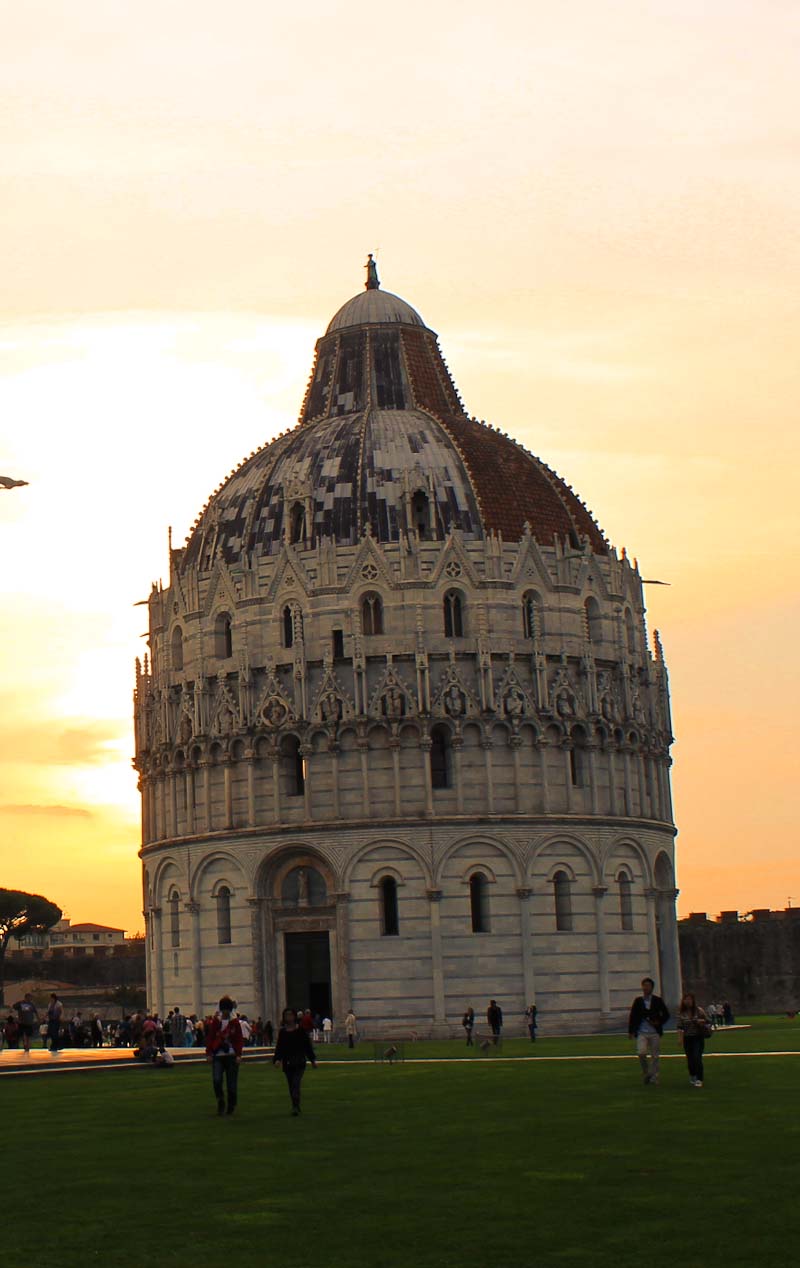 Like the Leaning Tower, the baptistery on Piazza dei Miracoli in Pisa is not completely straight.

While the Baptistery in Florence has the Paradise Gates, the Baptistery on Piazza dei Miracoli is the largest in Italy and much admired for the works of Nicola Pisano, who was the most important precursor of Italian Renaissance sculpture. The Baptistery has two roofs – one on top of the other – and this has made it acoustically perfect. Unfortunately for some, there is a strict rule of silence to be observed inside the Baptistery, so tourists have to sneeze or cough to test the incredible acoustics. 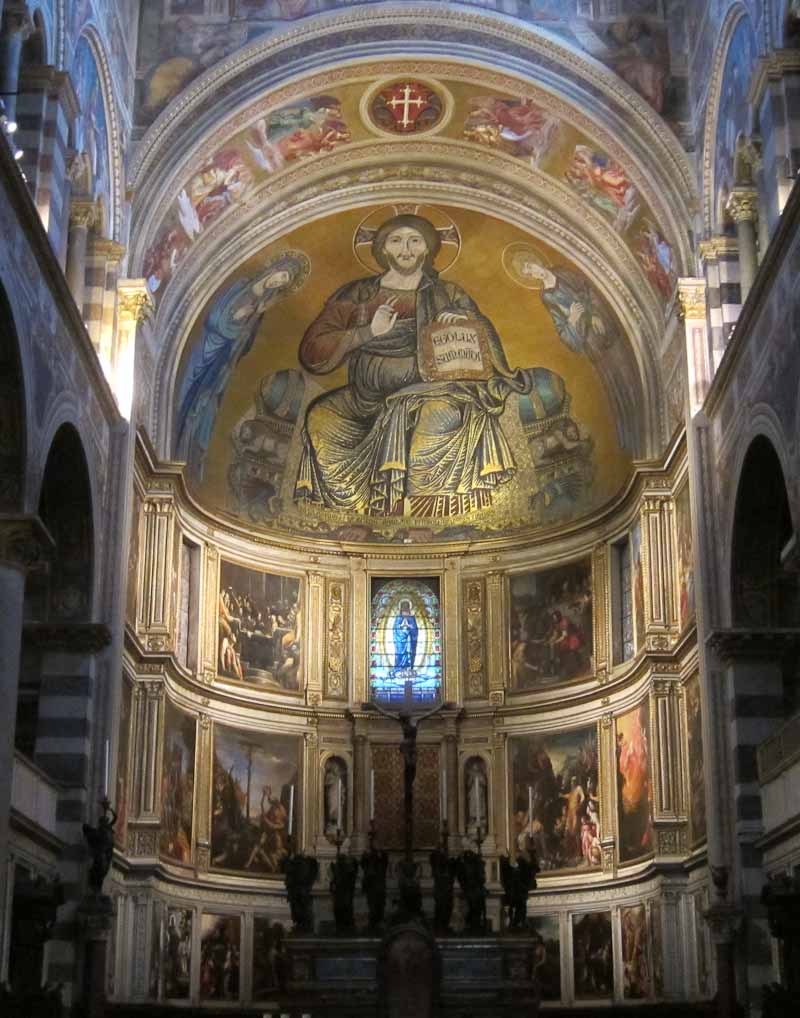 A huge Christ mosaic welcomes visitors to the cathedral of Pisa

The Cathedral is huge compared to Pisa’s contemporary tiny church by the river, and once inside, the huge mosaic of Christ in Majesty elicit loud sighs of awe as does the elaborately carved, freestanding pulpit.

I got lost in the pop-up, picture-bible marble carvings, designed to explain the Christian parables to medieval peasants who did not understand church Latin. In Pisa cathedral the traditional marble relief jumps out in 3D as small, ultra realistic sculptures with tender looks, chubby angles, guarding elders and personified cows and sheep around the classic nativity scene. The amount of detail and effect of light and shadow is amazing. All sheep and beards have nicely styled curls, the garments are perfectly draped around the bodies and the gestures and heads tilts serve to emphasize the passion and emotion of the story.

To think that stones can show so much feeling. 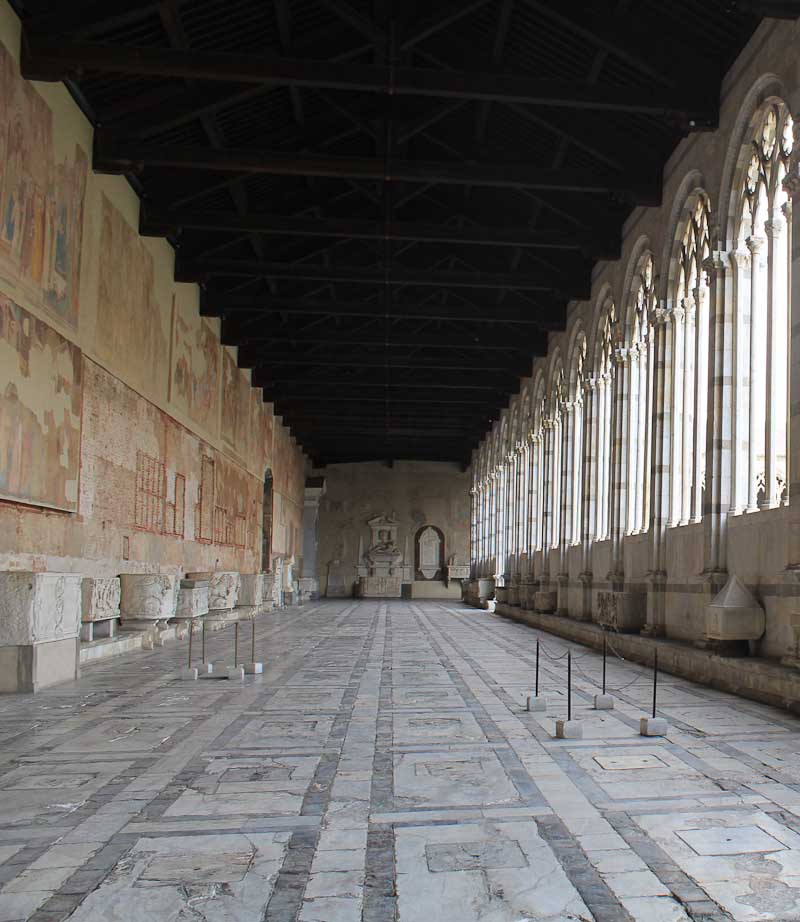 The most anonymous building on Piazza dei Miracoli is the Campo Santo. A cemetery said to have been built around a shipload of holy soil imported from Golgotha.

Inside the huge cloister with repetitive arches there are beautiful, though crumbling frescos, a vast collection of Roman sacrophagi and relics of eleven of the twelve apostles, the True Cross, the Crown of Thorns and the dress of Virgin Mary.

The Square of Miracles in Pisa really does its best to live up to the name.

Other sights and attractions in Tuscany

Wonderful wastes of time in Chianti