5 things to do in Pescara

I have been critical of Pescara in the past, but a recent visit convinced me that the city has been unfairly judged. At least I found these five things to do in Pescara highly enjoyable.


On previous visits to Pescara, I found the most populous city in Abruzzo a lot less attractive than other Italian cities with a population of 120.000 people due to its crude, rational architecture and lack of history, but this year we decided to give the city another chance. This led to the discovery of five highly enjoyable things to do in Pescara, and I’m sure there are more. 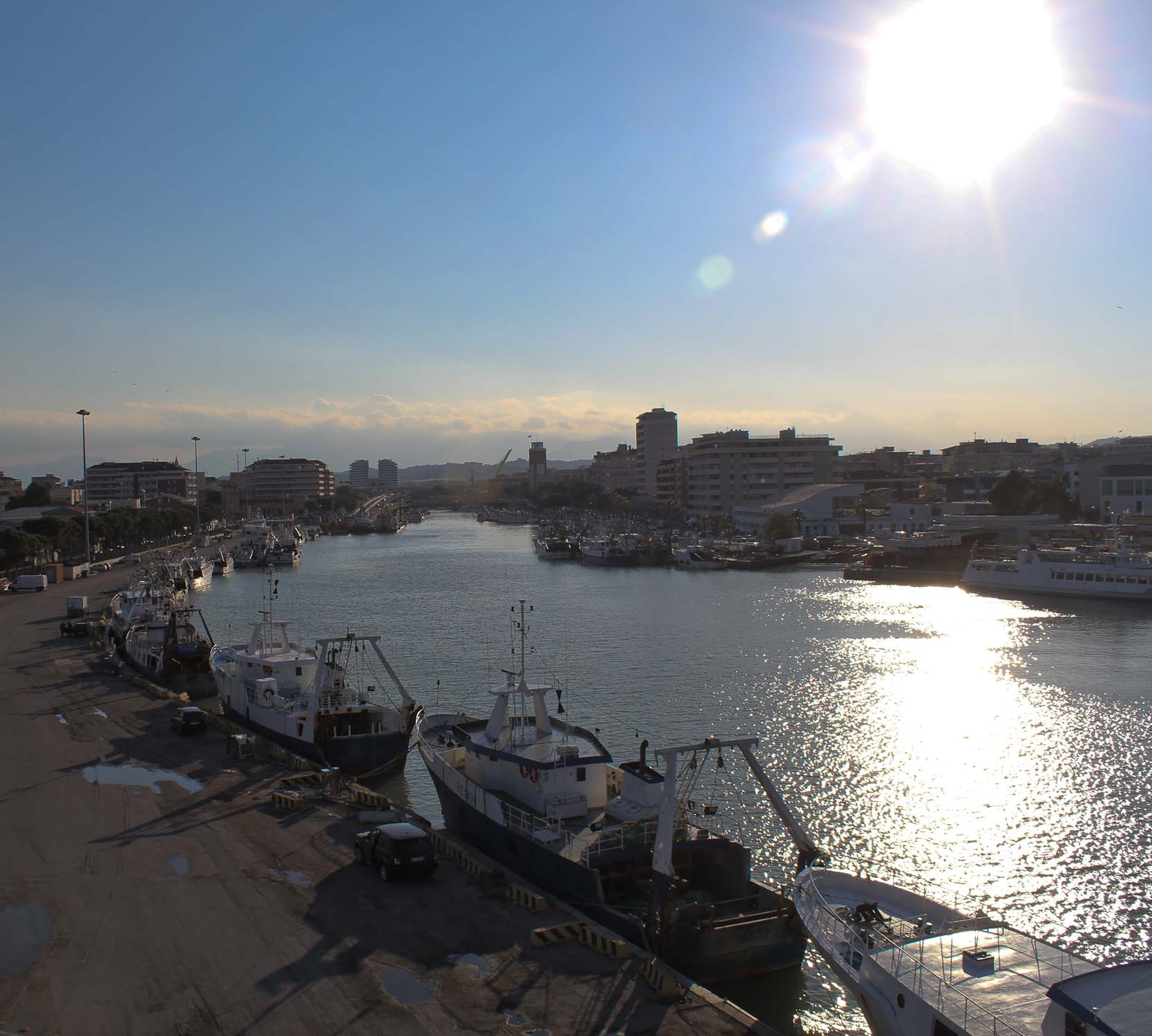 View from Ponte del Mare towards the mountains

We arrived in Pescara in the afternoon and asked the hotel’s receptionist for unmissable highlights and sights to be enjoyed in Pescara. She pointed us in the direction of the Ponte del Mare and her enthusiasm and pride in the city was unmistakable. ‘It’s such a beautiful walk, especially around sunset, where you are surrounded by endless beaches with the sea on one side and the mountains in the distance’, she said.

I couldn’t agree more. Ponte del Mare was built in 2009 as one of the longest pedestrian and cycle bridge in Europe. Shaped as a sail with a leaning mast and 466 m long, it spans the mouth of the Pescara river and connects the beaches north and south. A freezingly cold wind accompanied us on the spring walk, but clear skies and separate lanes for pedestrians and cyclists made it possible to focus exclusively on the fabulous views. 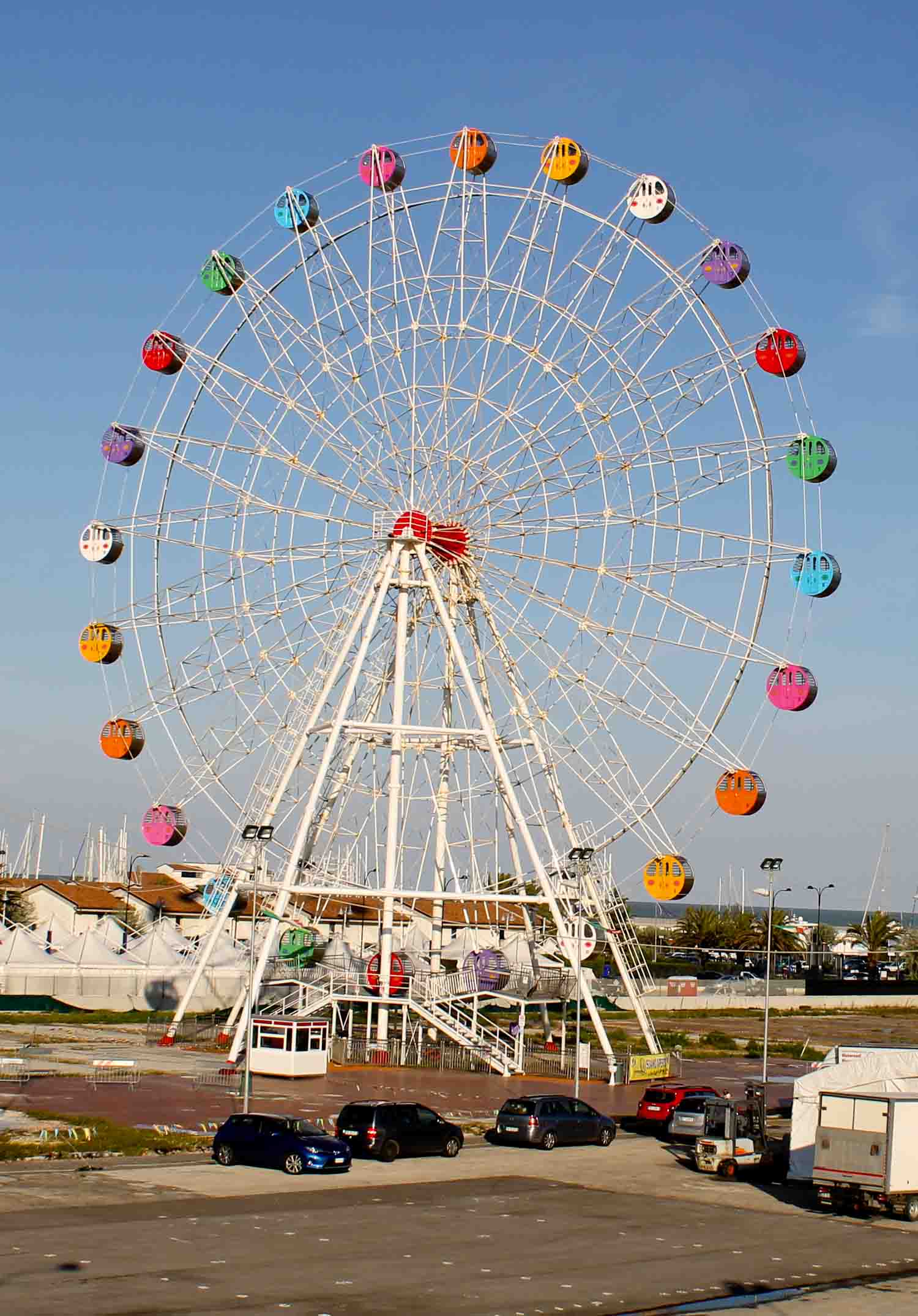 A ferris wheel marks the entrance to the port of Pescara

The port of Pescara is fouled by the presence of a dual carriage way running along the south bank of the river, but if you disregard the concrete, there is a string of queeky fishing boats and commercial vessels with winches, nets and a smell of tar that I find quite attractive.

On the mole reaching out to sea 6 or 7 rather modern looking trabucchi fishing huts balance on concrete breakwaters. They are not weird or pretty enough to be there for decorative purposes only, so I presume they can catch something in spite of short arms and shallow waters.

Opposite the trabucchi a Routa Panoramica ferris wheel with brightly coloured gondolas lure families and children to an empty parking lot that may double as a festival area. When we visited Pescara, a motorcycle fair for a club called Wild Willy had attracted every pair of pointed boots in Central Italy, and I suspect this would be the place to look for travelling fun fairs and circus performances. 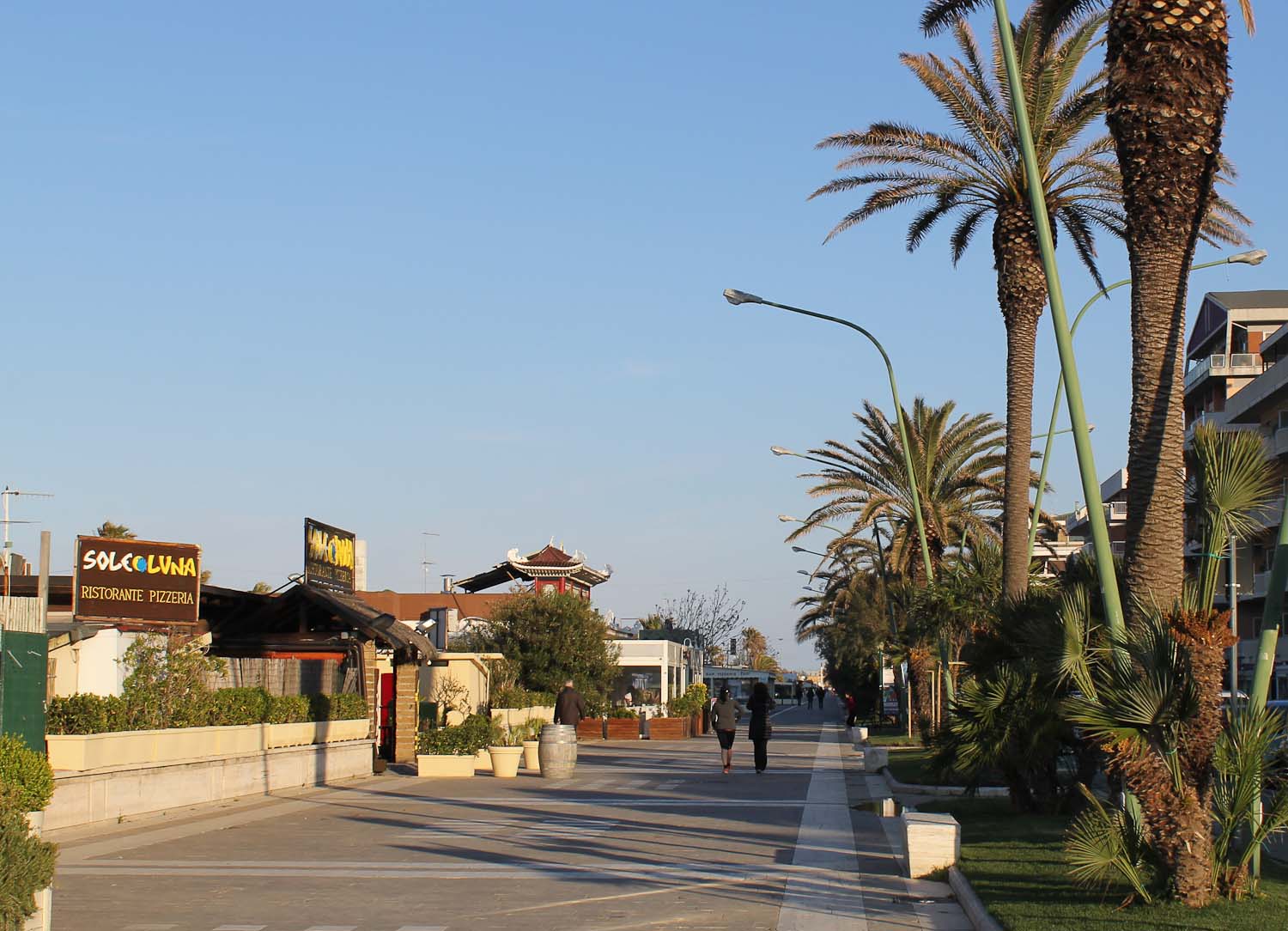 A long promenade follows the shoreline which is filled with beach clubs and restaurants.

With a shoreline of 20 km there are wide, sandy beaches everywhere to the north and south of Pescara, and I can’t think of another big Italian city where the beaches are so close to the city centre. This is a major attraction in summer with plenty of beach establishments, shops and restaurants within easy walking distance.

Out of season it’s a joy to stroll along the promenade of Viale della Riviera looking for the most creative and outlandish names for privately owned public facilities. In Italy, the proprietors are generally not satisfied with naming their pizza joint or beach club ‘Da Mauro’ or ‘Bellavista’. We walked past several planets, sun, moon and constellations like the Great Bear and the Southern Cross. There were references to Neptune, sirens, mermaids and other mythological beings. Along with the arbitrary Trieste, Hawaii and Tahiti.

Our study of inventive naming trends ended by Pietro Cascella’s boat sculpture, which in my personal opinion looks like a depressing waste of Carrara marble, but Cascella was a popular local sculptor and his solid works can be found in several places around town. 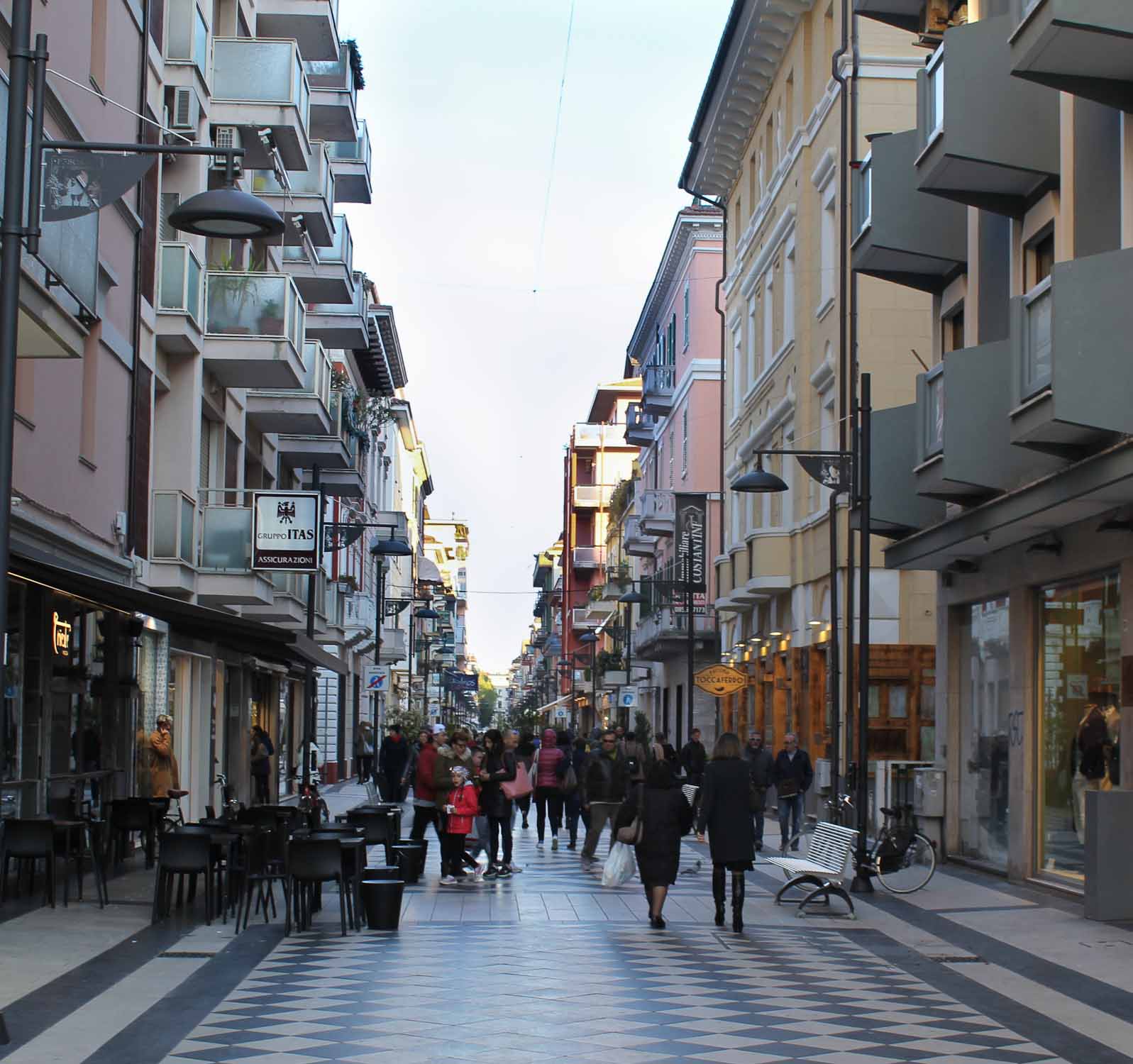 One of the really attractive features about Pescara is the well regulated traffic. There are big roads and tunnels leading motorized vehicles right into the centre of town, while many of the smaller streets are reserved for pedestrians only. This is a wonder in a country, where you normally have to jump for your life, when you hear the sound of a scooter or a car approaching.

In Pescara there is a huge pedestrian area framed by Corso Umberto I, Corso Vittorio Emanuele II and Via Nicola Fabrizi. In these street you’ll find the best fashion and food shops along with a choice of charming cafes and bars serving coffee and parrozzo or a refreshing Spritz including an ample choice of stuzzichini. Treats that would qualify as ‘hygge’ in Denmark. 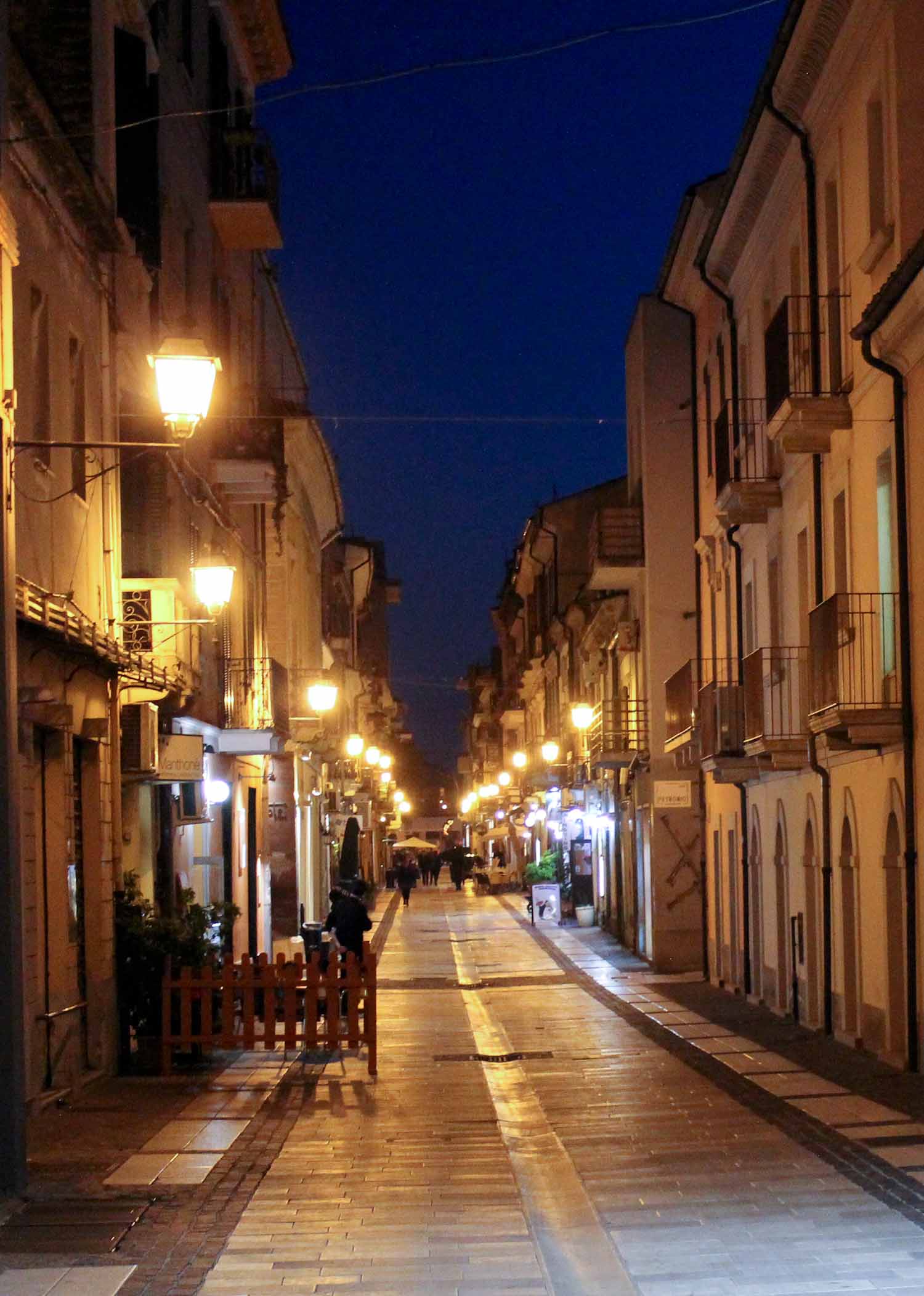 The old centre of Pescara is mostly famous for its nightlife.

5. Night Out in the Old Part of Town

We ended our tour of Pescara in Corso Manthonè south of the river. Corso Manthoné is the centro storico of Pescara, which had topped our list of places to visit upon arrival, but the friendly receptionist advised us to wait until evening.

The old part of Pescara is basically two short parallel streets of typical south Italian houses. This is where you find the birthplace of Gabriele d’Annunzio, which has been turned into a museum. Apart from that, there is nothing must to see of do in this part of Pescara in the daytime, but in the evening the old streets come alive with loads of restaurants and bars. We headed straight for Taverna 58, famous for its intimate atmosphere and local dishes, and had an unforgettable meal that ended with hand whisked zabaione by the table. An culinary experience that tops my list of things to do in Pescara.